A couple of weeks ago, Sharrow and I arranged a baby sitter and found ourselves with a rare child-free evening.

Remarkably, this coincided with a gathering of the clans at an event called the “Transportation Remix,” an evening of cocktails, cheek-to-cheek dancing and rollicking discussion of our transportation infrastructure.

And so you’re thinking: “Hey, you suggested to Sharrow that you use your date to attend the ‘Transportation Remix,’ right?”

Oh, you are a misguided soul, indeed.

No, no. We headed off to the Whitty, instead, which is a really hopping part of town these days. We had dinner at a fun new place called Meiji, which is a Japanese-style restaurant that serves neither sushi nor ramen. (I recommend the spinach appetizer called the Goma-ae.)

But since I missed the Transportation Remix, I’ll do what I usually do when it comes to participating in the national conversation on transportation. I will throw my remaining unripe tomatoes from the back row. (UPDATE: I see I needn’t feel guilty about missing the Remix, because the good folks over at WeBikeEugene have posted video.)

So. Let’s say you are cruising south on Coburg Road, toward downtown. You stop at a red light at Oakway Road. It is there that you are seduced by the aroma of egg rolls frying at P.F. Chang’s, the patio of which sits immediately to your right.

It’s like the Sirens singing to Odysseus. I must lash myself to my top tube as I go past here, because — although I have never eaten at P.F. Chang’s — every time this happens I nearly hop off my bike and run inside.

But this isn’t the problem I’d like to talk about today. The problem is trying to focus on what you need to do next. You need to get to the bike path, through this: 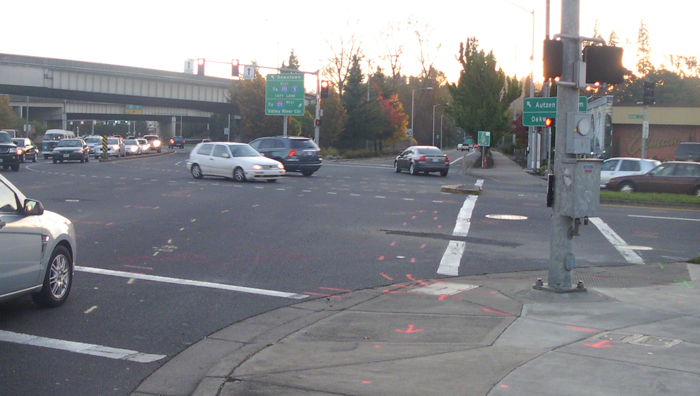 Getting to the bike path means you have to veer across Southwood Lane, which funnels fast-moving traffic from Coburg Road down to the I-105 onramp. This would be a good time to go to our handy diagram. 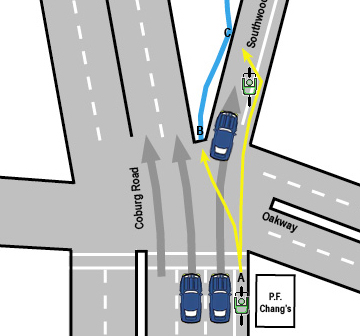 Our hungry cyclist’s goal is to escape the gravitational pull of the egg rolls and get from Point A to one of two acceptable destinations: either Point B or Point C, where she can access the bike path (shown in blue). The path will take her, eventually, up and over the Ferry Street Bridge and back to the hippie-er side of the river.

As you can see, this is problematic. Cyclists have a few options here. I have observed at least four approaches to this crossing, which I think indicates that this is a less than ideal situation.

Here is what I think is the most common approach (and what I have typically done). Cyclists head through the intersection and down the bike lane on the right side of Southwood Lane. They slow and wait for a break in the traffic, so they can veer across Southwood, reaching Point C. There are often so many cars, though, that you reach Point C before there has been a gap in the traffic, so you to stop in the bike lane and wait there for an opening as the breeze from passing traffic ruffles your hair.

By the way, you will have passed this helpful warning sign:

As if any motorist notices this, especially since it is lost in the trees.

Someone also has put up a wayfinding sign to help cyclists navigate this problem.

Anyway, I have started taking a different approach at this intersection. After many months studying the traffic light sequence at Coburg and Oakway, I try to anticipate the green light.

As soon as I see the cars that are heading toward Coburg Road from the I-105 off-ramp to my left start to slow down and stop, I know there must be a yellow light there. And if there is a yellow light over there, then my light is about to turn green (assuming they don’t change this up, or one day it’s going to get me into trouble). So I start rolling slowly into the intersection, the light goes green, and I get enough of a head start to get in front of the cars that are preparing to launch themselves down Southwood Lane. And I scurry across to Point B ahead of the cars.

I do want to say that I really don’t like complaining too much about such things. Is it really so bad to have to wait for 20 seconds for traffic to clear? Well, no. Is this a hazardous situation? Perhaps, but only mildly, I think.

But I have decided to bring it up because the city is currently working on it’s Bicycle and Pedestrian Master Plan. And I saw that this problem was pointed out on a Google map the city used to solicit ideas and complaints. A commenter called “Ellen” noted this very problem: “Pretty tough to get from Coburg sidewalk to the bike path. Is there an easy fix?” I use this intersection regularly, so it struck a chord.

Is there an easy fix? I’ve been pondering this …

I’ve never been a huge fan of what are known as “bike boxes.” But maybe that’s only because the only one I know of in Eugene is one I rarely find a need for. (Portland has a lot of them.) The Eugene bike box is at High Street at Seventh Avenue. I ride past it several times a week, but rarely use it.

Basically, the bike box situates you in front of automobile traffic as you sit at a red light. This allows you to navigate a trouble spot while the cars wait behind you. In the case of High Street, it is supposed to allow you to get from the bike lane on the left side of this one-way street, to the bike lane on the right, which begins north of Seventh.

But traffic on this part of High is not nearly as thick as the traffic on Southwood Lane, which presents cyclists with a similar problem.

So could it help to have a bike box at the problem spot on Coburg? It might be something like this diagram (bike box and bike lane marked in green).

I don’t know. It’s a fairly long stretch of road from where a bike box would have to be to Point B — I’d guess about 30 yards. That might feel like a fair bit of exposure out in the middle of a busy intersection. On the other hand, I’ve been doing this without a bike box, and I think I prefer it to the method marked by the yellow line.

Do you ever deal with this area? Does it bother you at all? Would a bike box here help? Would you use it? Anyone out there who uses the bike box at Seventh and High? Are bike boxes worthwhile in general? Would you like me to ask more questions?

13 thoughts on “The crossing … and some thoughts about bike boxes”