This an outrage! I’m shocked, just shocked. The city of Eugene decided to make a free parking zone downtown, which means they plan to lop the heads off of a couple hundred parking meters — which means they’re worthless for locking your bike to.

WeBikeEugene seems to have broken the news on this and gone to the trouble of calculating the actual number of potential bike-locking locations lost:

It would be a grave mistake to remove 165 bike parking spots from an already inadequate downtown bike parking scene … if cyclists have nowhere to park their bikes, they won’t be able to ride.

Then a commenter identifying himself as “joe” adds to this post a self-described downtown “rant:”

Any time there is a reason to be downtown even with the current poles there is no parking (like Science Pub at Cosmic Pizza). … We need parking at Broadway and Willamette, the park blocks for Saturday market, and around the club district.

So, with this outrage afoot, we at Eugene Bicyclist decided to take a ride downtown and see what the heck is going on. First stop, Willamette Street, between Seventh and Eighth avenues.

Ah-ha! Right there outside of Perugino, look at that! And we must ask, what would this cyclist have done without the parking meter? Would he have forgone the cappuccino? (We’ll leave aside for the moment that the owner has locked the Bianchi to the parking meter with a stretchy cable lock, and a determined thief could probably lift it over the top of the meter just as if the meter didn’t have its head still on at all.)

Well. Let’s move 10 or 15 yards down the sidewalk and take a look. Here we go. Right in front of the sushi place:

Doggone it. Where on God’s green earth can I park this bike?! Look, there’s even cyclist right there in the picture. Scratching his head over where to park his bike, no doubt.

I guess we’ll have to keep looking, won’t we? Let’s keeping going south on Willamette, another 20 yards across Eighth Avenue, OK?

This is preposterous! Even if there were some bike racks around here, they’d probably all be full. And this is just a block from Broadway and Willamette and a block from the Park Blocks, where they have Saturday Market for goodness sake. (We should point out that the Park Blocks are actually outside of the free parking zone, so presumably the parking meters in that area are safe for the time being.)

If only I could find someplace to put this bicycle. Then I could patronize all of these businesses — and I wouldn’t be tempted to drive my car downtown.

OK, I guess we should keep looking. Let’s head over to Olive Street and Broadway, near Luckey’s (I think we’re in the “club district” now, Luckey’s being a “Cigar Club” and all.)

I can’t believe this! Is there no one downtown who cares about the interests of cyclists?! What about over on the other side of the street, by DIVA?

This is really getting annoying. If a guy could just find a place to park his bike, everything would be so much better. Let’s go over to the Strand Building where Cosmic Pizza is … 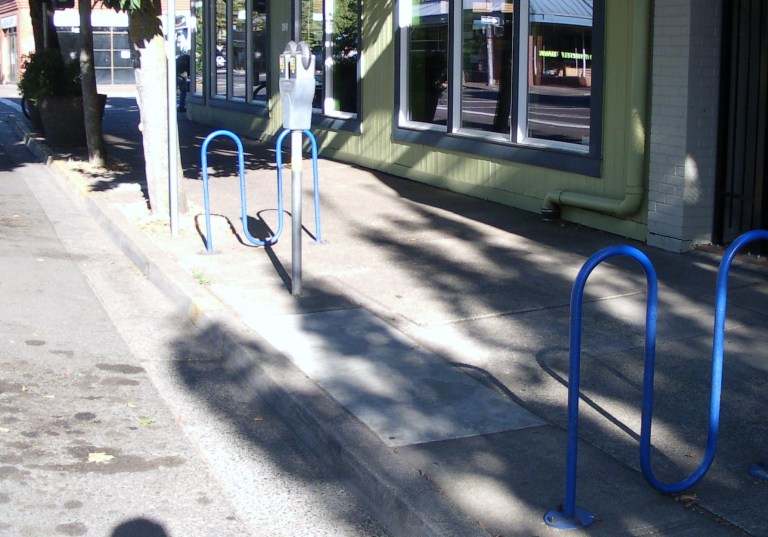 So just suppose — just suppose — city bureaucrats come along and, Hercules-like, cleave the noggins from this two-headed Hydra. Suppose that happens. What is our downtrodden cyclist to do then?

OK, you get the point: Let’s not overreact, here. And it’s not going to kill anybody to lock their bike up and then walk a block to wherever they need to go. Even if they’re wearing roadie shoes.

That said: Sure, there are some parts of downtown where it would be nice to have a little more in the way of places to lock a bike. I second what Mike wrote over at WeBikeEugene about not getting militant about it. I mean, the last thing we need is a bunch of cyclists bitching and moaning about how we’re victimized and marginalized. Nobody wants to hear that, right?

So, I wonder. What if the “cycling community” tried to launch something really fun and cool. …

Stay tuned. I’ll follow up on this soon. Maybe tomorrow.

Wait, this is a cliffhanger? Wow. …