As long as we’re mucking around in the minefield of brake removal, let’s go ahead and take some questions. You, over there, the one who just pulled up and left a skid mark on the road …

Hi. Yeah. Can the cops write me a ticket for not having any brakes on my fixie?

Hmm. I suppose we are going to have go to the Oregon Revised Statutes, which are rarely of any help, but alas, we are a nation based on laws. At least that’s what they keep telling us little people.

A bicycle must be equipped with a brake that enables the operator of the bicycle to stop the bicycle within 15 feet from a speed of 10 miles per hour on dry, level, clean pavement.

Hey, that’s a pretty lucid sentence, given that you found it in the Oregon Revised Statutes!

Oh, dear Grasshopper. So much to learn, you have.

That may seem like a simple and lucid sentence. But as with many matters of jurisprudence, it is not simple in the least. And even the most pedestrian of lawyers could make this complicated. In fact, this statute poses prickly, prickly questions.

Hey, that reminds me of Bill Clinton.

Speaking of Bill Clinton, does this issue have a crux?

Any issue worth its salt has a crux.

Could we get at it, please?

Yes. Thanks to the uber-comprehensive urban cycling blog BikePortland, we have dug up the transcript of a traffic court hearing that happened in Portland a few years ago.

This was not just any traffic court hearing. This case involved a young Portland woman who worked as a bike messenger. She had been riding her fixie around downtown Portland. Her fixie had no handbrakes. A police officer ticketed her for violating the statute known as O.R.S. Vol. 17, 815.280(2)(a).

The cyclist’s defense lawyer questioned the officer who wrote the ticket. And therewith, we bear witness to this immortal exchange:

DEFENSE LAWYER: So, officer … you indicated for the defendant to pull over, and … she brought her [bicycle] to a stop; is that correct?

POLICE OFFICER: That is correct. …

DEFENSE LAWYER: OK. Can you describe for us how the defendant brought the bicycle to a stop?

Therein lies a rather succinct rendering of our crux, namely that (1) it is possible to stop a brakeless fixie, and (2) at least some cops may not actually understand what is going on here.

But we should not fear, right?

No, this is why we have lawyers. Judges. Courts. It’s why we have epic, deep and thoughtful battles in the United States Senate over the appointment of the highest justices in the land.

These are the cunning minds that must interpret the gray areas.

Like “what is a brake?” right? Hey, yeah, the judges! The judges understand, right? They are wise.

Well, the judge in this case levied our young bike messenger a fine of $73.

No way! Didn’t he understand that the fixed gear IS the brake?

He did not buy that defense.

What did he say?

Well, this was in Portland. “Rose City,” you know.

Evidently, it was Gertrude Stein. The original had four roses, though. These days you usually only hear about three roses.

What happened to the fourth?

What else did Gertrude Stein say?

She said, “There is no there there.”

Was she talking about Portland?

No, I think she was talking about Lake Oswego.

Have you ever been to Lake Oswego?

Have there been any other court cases like this?

Apparently, there have been. And some judges have ruled that the fixed gear does indeed qualify as a brake.

So it is still very gray?

As gray as a foggy October morning in Eugene. The Legislature almost fixed this issue a couple of years ago by adding a clause to the law that said: “… except that a fixed gear bicycle is not required to be equipped with a separate brake.” But they pulled out at the last second.

Almost. How do you feel about that?

Conflicted, actually. It’s fun sometimes being an outlaw. But let’s get back to the original question. Do the Eugene police have any kind of policy about whether a fixed gear qualifies as a brake? I’d still like to know if I can get a ticket?

Well, we e-mailed the very friendly Eugene Police Department public information officers. They apparently consulted with the traffic division and then sent us this reply:

We do on occasion, cite cyclists who do not have adequate brakes. Just slowing your pedaling or using your feet to stop like Fred Flintstone doesn’t mean your bike is “equipped” with brakes.

Any thoughts about how I should proceed?

I don’t think I should be offering legal advice, but if you don’t tell anyone I said so, I suppose you could do something like this:

It all depends, you see, on what you mean by “put on a front brake.” Look again. 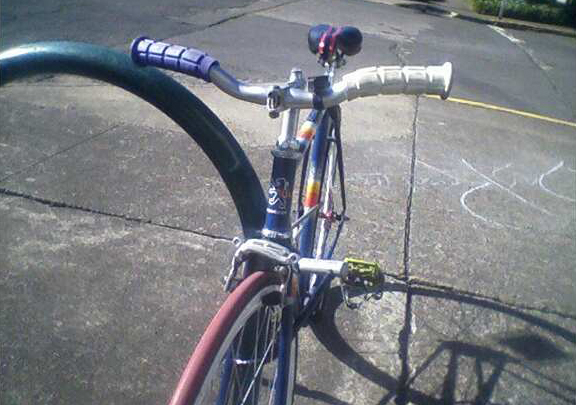 Hey, wait a second. There’s no brake lever. And there is no actual cable attached to the actual brake! Do you suppose this would be a brilliant ruse to deceive the cops?

Well, we can only speculate. I suppose it might well be a crafty decoy brake. But they have been doing a lot to advance bike brake technology in the last few years. This may be one of those fancy new cableless, telepathically activated brakes.

Probably. And just try explaining to a judge how those work.

What else can I do?

Well, you can always employ The Force: 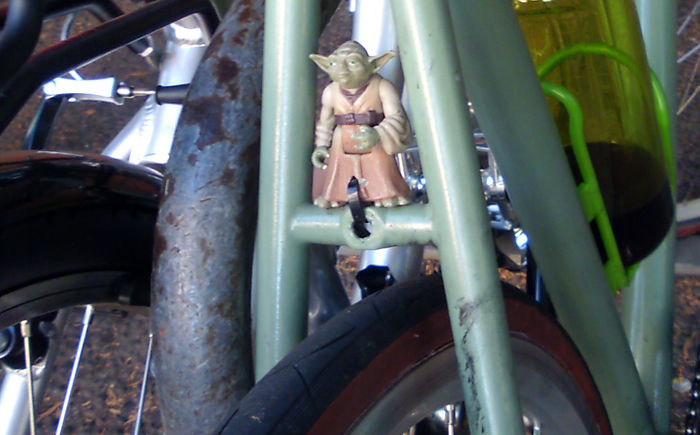 That’s cool. Using The Force is good when you are riding a fixie, you know. And Yoda is kind of like a telepathically activated brake, too.

Yes, although this particular bike did have a front brake, too.

Ah, because Yoda is old and wise.

Maybe Yoda could become a judge?

Not a bad idea.

By the way, do you have any tortured inner conflicts?

You sometimes make fun of fixies, you know?

Oh, now and then, but it’s all meant in good fun.

You know what I think? I think, when it comes to fixies, you’re really a bit like one of those ranting homophobes who is, deep down, a tightly closeted gay man himself.

That’s all we have time for today. See you all next …

Hey, that’s it! You are! You don’t own a fixie, but you secretly covet one!