Sorry we’ve had no post here for over a week. I’ve been out of town, helping move my dad into what they call a “memory care facility.” Basically, that’s a nursing home for people with dementia.

My dad is suffering from what is probably middle-stage Alzheimer’s disease. And I can say with confidence that this will rank high among the crappiest weeks of my life.

I have toured more nursing homes than I care to remember. I have met some kind and compassionate people in doing that. And I have met some people who seemed not unlike used car salesmen.

The whole thing feels dirty. Not so much the industry, but the fact that it has to exist at all. That our families are often so geographically scattered that there seem to be few other options. That we shuffle these confused and rather frightened souls off to be tended by strangers.

I know there are some good reasons for this. Not least among them that my mother can no longer care for him without risking her own health and well being. But you end up feeling you are engaging in a betrayal, an abandonment, a casting off … 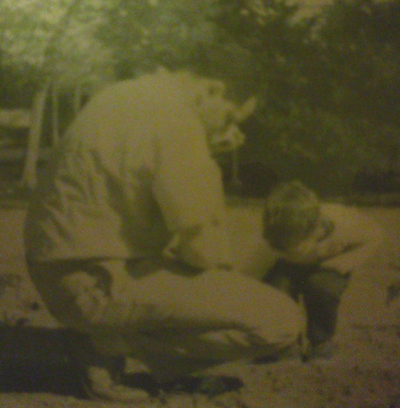 There were too many conversations this week that began, “So, Dad …” as my brother, my mom and I tried to explain why, say, another nurse from another nursing home was stopping by to ask him questions like “What did you have for breakfast?” or “What is your birthday?” These questions he is able to deflect with surprising deftness (“You mean when was I born? A hell of a long time ago!”), though not enough to hide the fact that he has no idea what the answers are.

It’s hard to know how much he grasps of what we tell him. Sometimes he babbles utter nonsense. The next minute he surprises me with a moment of clarity.

But then the worst of these conversations arrived. “So, Dad …” And we went on to explain how he would have to stay in this strange new place and that he wouldn’t be going home today. Or tomorrow.

A couple of hours after my brother and I left him on that first day, the nurses called us and asked us to come back. Dad was being “difficult.” Stubborn, obstinate, argumentative. Difficult? That’s not difficult. That’s his essence.

But we went back and chatted with him for an hour or more about why he was there and what this illness is doing to him. He argued us all the way.

It reminded me of the long discussions we used to have around the dinner table, arguing about everything from whether cigarettes were addictive (not one to subscribe to conventional wisdom, he never thought so) to organic food (all food is organic, he once pronounced). He loved the sport of it. I sometimes think he staked out a position and dug in his heels just so he had something interesting to do while he finished up the wine and Mom did the dishes. (I don’t think Dad ever washed a dish in his life.)

He can’t argue anything complex anymore. He gets lost. But somehow I ended up leaving the nursing home that last night with the feeling that he still can be a fun guy to talk with. And that was a feeling I hadn’t had for a while.