Hey! We haven’t done one of those Q&A’s for a while. Let’s take some questions.

You, over there. What’s on your mind?

Well, have you ever perused the writings of Sir Isaac Newton?

I was a physics major for a brief time, so yes. Why do you ask?

Well, Newton said: An object in motion will remain in motion unless acted on by an external force, right?

I thought it was Snookie who said that.

I’m pretty sure it was Newton. But I was wondering: Is there anything in there about a red light having an effect on a cyclist in motion?

No. Despite his astonishing intelligence, Newton was unable to show that a red light had any discernible effect on a cyclist in motion.

In fact, as a cyclist, you may sometimes find yourself proceeding through the red light apace, with no apparent change in speed or direction.

What is that pickup truck doing?

It is waiting patiently for the green light.

Why is the pickup affected by the red light but not the cyclist?

Can you explain relativity?

Sure. As a cyclist, you are better than those slobs who are driving pickup trucks. And don’t you ever forget it.

And: Unlike a motorist, you pose little threat to society at large. Assuming you, you know, hit something.

And (as if all that weren’t enough already!): You actually would have to engage in some effort to stop and then re-start a bicycle. Momentum is a precious possession.

But that’s what keeps you fit — effort. Isn’t that a good thing about riding a bike? Keeping fit?

Not when you haven’t even made it to Allan Bros. for coffee yet.

Well, to say we have never done this might be a shameless lie. Still, I’m afraid we cannot endorse it as our official position.

Because we might decide to run for office some day.

And people who drive vote, don’t they?

I’m afraid so. Which reminds me … check this out: 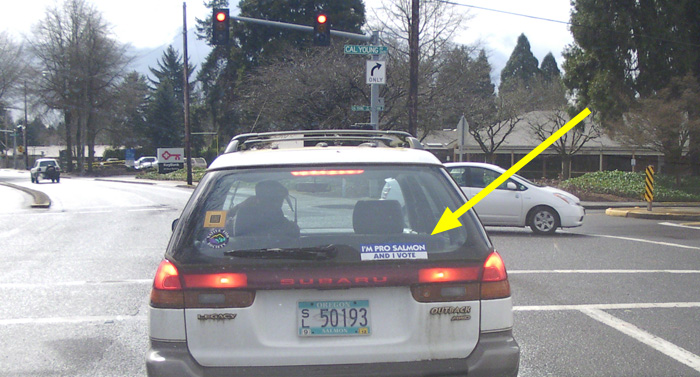 Do you suppose that strikes fear into the heart of an elected official?

I should think they would be wetting their pants, don’t you?

So what is your official position when encountering a red light?

Well, we must state for the record that a cyclist encountering a red light should just roll up his pants and wait.

There are many ways to wait, are there not?

Sure. You can wait on your tippy toes. 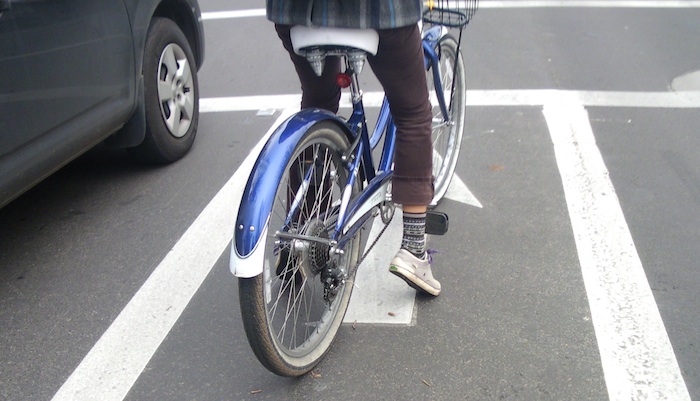 Are there other ways?

Yes. Here are two of the more advanced methods (efficiently shot in one single photograph!): (1) the track stand and (2) the light-post grab: 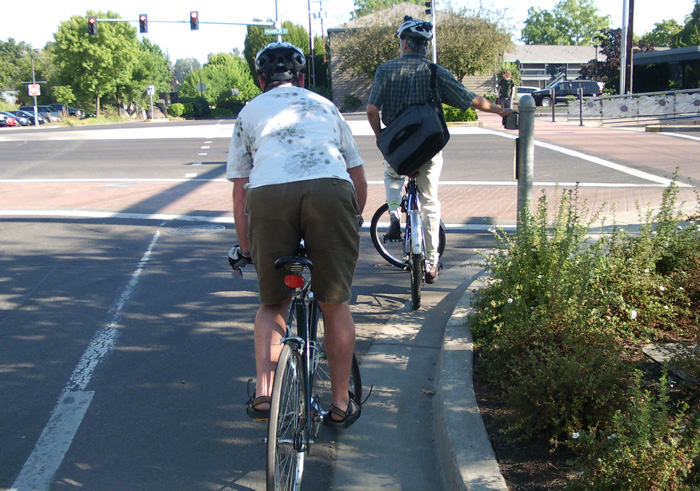 How would you describe that guy grabbing the post? 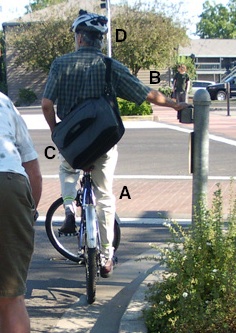 He has that nonchalant, gazing-into-the-distance pose that is common in models for the Land’s End catalog.

How much for the hair?

It’s free. You just have to wait till you’re 50. The trick is staying ruggedly handsome in the meantime.

The guy who is track-standing doesn’t look as nonchalant, does he?

What is your opinion of the track stand?

Track-standing is like pulling up to a red light and starting to juggle. I mean, you can certainly admire the skill, the hours of solitary dedicated practice.

Which is the more practical skill: juggling or track-standing?

Have you ever heard of a professional juggler?

Have you ever heard of a professional track-stander?

Ever seen one performing at a kid’s birthday party?

There you have it.

I always end up feeling so silly.

So what’s your preferred method of waiting?

I often use the lazy-man/foot-on-the-curb rest. Much like this …

… which allows you to keep your butt on your saddle while simultaneously having a foot down. I don’t do this as much anymore, though. It often requires that you move so close to the curb that your bike is not sitting over the loop — if there is a loop.

I’m supposed to be giving the answers here.

Oh, right. Hey, will we learn more about the inductive loop sensor tomorrow?

We will. Or maybe the next day.

So I should stay tuned?

Yes. Hold that track stand … we’ll be right back!

3 thoughts on “Red-light techniques for the urban cyclist, Part 1: Waiting”