The occasional commenter on this blog who goes by the name “Lvc” made amazingly quick work of the spoke card project we suggested in yesterday’s post. This arrived in my e-mail inbox this evening: 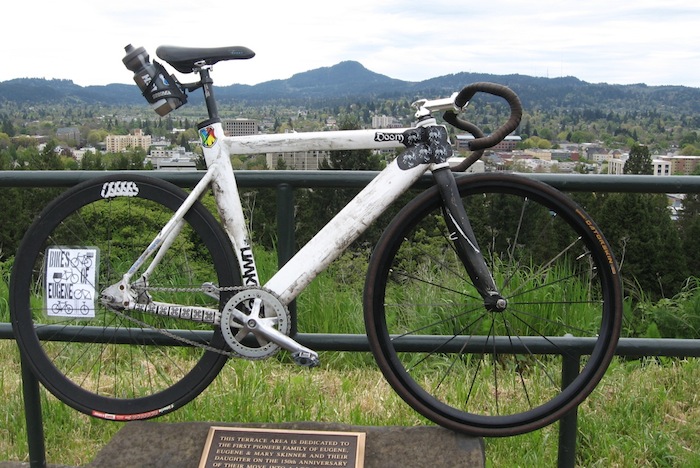 Taken atop Skinner Butte it would seem, with a lovely view of the other two major buttes in Eugene: Spencer and Ya-Po-Ah (visible just under the top tube). Distinctive bike, too. If I ever spot it in my travels I will wave and say hi — assuming I can catch him. It looks fast.

By the way, Lvc has a cycling blog as well: Eugene Doom Bike. Current latest post promotes the fixed-gear time-trial up Skinner Butte that he is organizing for June 5th.

Here’s another, this one from Shane, who also happens to be the local organizer of the Kidical Mass rides. It’s on his XtraCycle, which is one of the bikes of Eugene, of course: 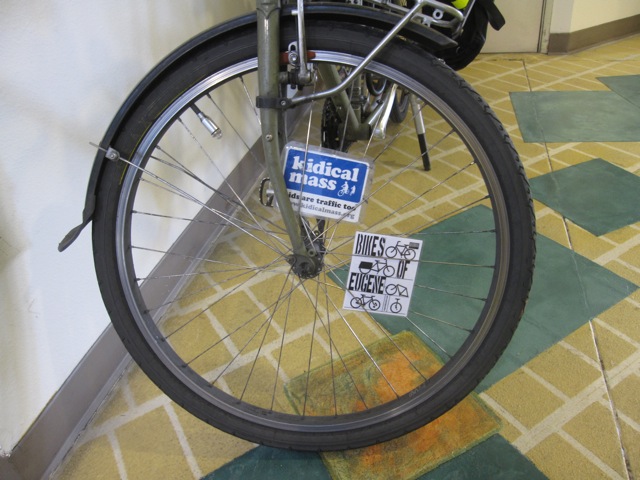 Shane says he took this photo as he went to a meeting, and he suggested that the floor might be recognizable — anyone know what building this is?

So now that we have a fixie and an Xtracycle, we need some intrepid Eugene cyclists to send us pictures of the spoke card on a cratie, a stripped carcass of a bicycle and a unicycle. Let’s complete the cycle.