Just wanted to point out an articulate “Guest Viewpoint” on the Opinion page of today’s Register-Guard. 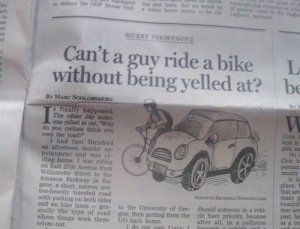 Written by a UO prof named Marc Schlossberg, it’s about being recklessly passed and yelled at by a motorist for no good reason.

What he describes reminds me of the cyclist who was brushed by an SUV a few weeks ago at Broadway and Hilyard.

Some motorists (a small minority, I think, but enough to be worrisome) just can’t seem to accept that they occasionally will have to drive behind a cyclist.

Here’s a law all urban cyclists should know: Oregon Revised Statutes 814.430 — Improper Use of Lanes. It spells out when you should stay to the right and when you can, as they say, “take the lane.” This law, I think, is at the heart of both of these situations.