I’ll go a little out of my way for a free cup of coffee and a bagel.

I stopped by the first of this summer’s Breakfast at the Bridges events back on May 27. It was along the Fern Ridge Path at the Blue Heron Bridge. That’s the little bridge over the Amazon slough by Caesar Chavez Elementary School, near the Albertson’s at Chambers and 18th.

What is Breakfast at the Bridges, you ask?

Well, as you come upon the breakfast, you’ll see some tents erected on the grass. And when you stop, you’re likely to find some cyclists standing around eating bagels, chatting, pouring cups of coffee and drinking smoothies made on a pedal-powered blender.

Cyclists of all sorts, mind you. A melting pot. 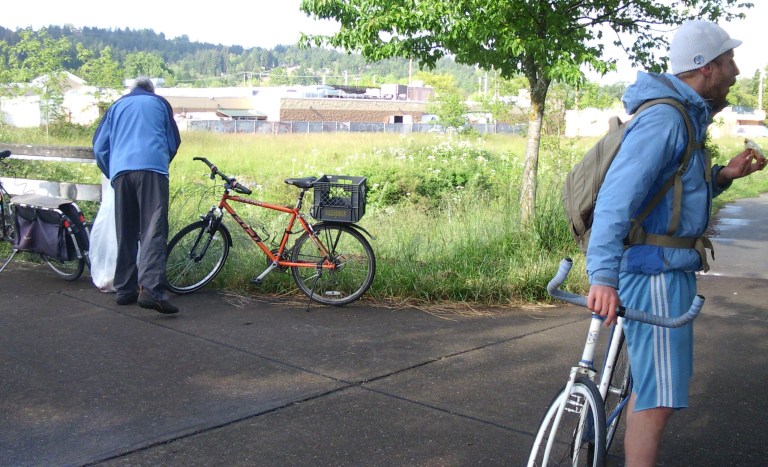 In this one riveting photo alone, you can see an Xtracycle (far left), a crate bike and a fixie. (I really must apologize to the fixie guy for taking this photo just as he was trying the chew up a huge bite of bagel.)

There’s usually a bicycle mechanic on hand, who will do a quick safety check on your bike. I think there are some city employees hanging around, spreading cycling goodwill (the city helps sponsor these events). So you can chat with them about transportation issues, if that’s what you like to do early in the morning.

Somebody might hit you up to join GEARs. It was barrels of fun.

Of course, I’m told a motorist stormed over after learning of the event and angrily demanded that if cyclists wanted to eat bagels and drink coffee they should be like real Americans and do it while they are driving a car. (OK, I made that part up.)

Anyway, don’t fret that you missed the first one. The breakfasts are held the last Friday of every month from May through September. Which means the June one is coming up this Friday.

Here are the locations for the rest of the summer. All of the breakfasts are from 7 a.m. to 9:30 a.m:

You should go, because at the May breakfast I heard some of the people working the event wishing for more turnout. Of course, if they really wanted to draw a crowd they’d make it Happy Hour at the Bridges and ditch the pedal-powered blender for … this.

Too many liability issues probably …

6 thoughts on “Free coffee, anyone?”