EUGENE BICYCLIST: It’s time once again to take some questions from our studio audience. You, sir, over there. You have a puzzled look on your face.

TODAY’S QUESTIONER: Yes. Thank you. So, what’s with these green patches of bike lane on East 11th Avenue?

When did these show up?

We believe aliens dropped from the sky and put them in just a couple of weeks ago.

And what does the color green signify?

Green can signify many things:

No, I mean regarding bike lanes? Are we heaping even more responsibility onto this poor color’s weary shoulders? Can this be fair?

Probably not, but we’re going to do it anyway. The U.S. Department of Transportation has said so. Green will also signify: Safe and happy bike lane.

The U.S. Department of Transportation said that?

Well, more like a place where cars have to cross the bike lane to get into a right-turn lane. Things like that. Here:

I see. Are these the first green bike lanes in Eugene?

No. There’s one on Valley River Drive, near the mall, across from Barnes & Noble and Toys R Us:

Have you ever been in Toys R Us?

Are there other green lanes?

I’m told there is a green lane on Roosevelt at Maple Street, but I haven’t seen that one myself. And then there is that blue bike lane at River Road and Beltline, which has been there for some time.

Why is there a blue lane?

It’s old. Nobody knew about green when that was put in. But for bike lanes, blue is out. Green is in.

Blue has been reserved for handicapped parking spaces. Anyway, a bunch of cities have been testing green pavement for bicycles for a while now, and —

What did these tests show?

According to the feds’ memo:

“… positive operational effects have been noted in the experiments, such as bicyclists positioning themselves more accurately …”

Well, there are exceptions.

And what about this guy?

OK, this guy has a legitimate excuse. I saw him emerge from the Bier Stein around happy hour time, hop on his bike and head off. So I think maybe the one-way nature of 11th Avenue was simply not compatible with his need to get home quickly to pee.

What else does the feds’ memo say?

Green has some kind of magical powers?

In the field alternative healing known as color therapy, green relates to the “heart chakra.”

And it “is the color of balance and harmony and can, therefore, be helpful in times of stress.” I didn’t make that up. I got it off the Internet.

Well, it’s a good choice for a bike lane.

Can we expect to see more green lanes in Eugene?

We asked Lee Shoemaker about this. He is the bicycle-pedestrian coordinator for the city of Eugene. He told us that “city staff are working on policies and where we will install them” in the future.

And you probably will see green pavement on parts of the new cycle-track on Alder Street that is being built this summer. So, yeah, it sounds like there will be more of them.

OK, so this green paint —

No. Just kidding. We don’t want to be putting out misinformation here. It’s actually “thermoplastic.”

No, no! The have excruciatingly detailed discussions about the virtues of paint vs. themoplastic in pavement marking applications. The benefits of thermoplastic, you see, are —

[There is a sudden loud bang and then scuffling sounds.]

Hey, who are you? What …! Ahg! Some little fuzzy creature has just barged into the office here at Eugene Bicyclist Central!

[More banging and a crash.]

[Banging, grunting and other sounds of struggle.]

What … Who are you, you fuzzy little beast?

I do not ride green lanes on roads!

I do not ride green lanes on roads.

“Would you? Could you?

Ride them, ride them, come with us!”

I would not, could not with a bus!

I do not ride green lanes on roads!

Would you ride them with a crate?”

I would not ride them with a crate,

I do not think they are so great.

Try them and you may, I say.

And I would ride them with my kids.

And I would ride on manhole lids.

I would ride them with the cars

And I would ride with aero-bars

And I would ride them with FedEx.

And I would ride them with EmX. 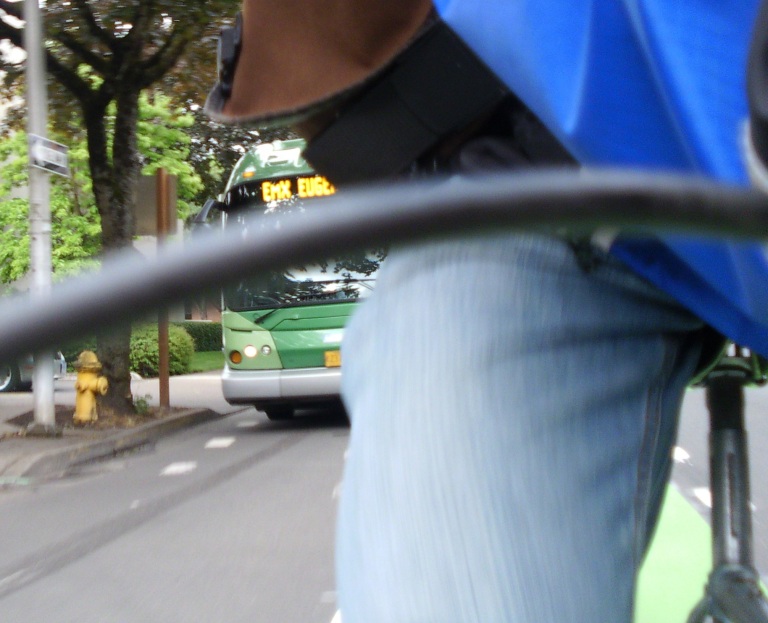 I would ride them with a bag,

And I would ride them dressed in drag.

We will ride them

You will see us

We will ride them with a Prius.

I would ride them with a truck. 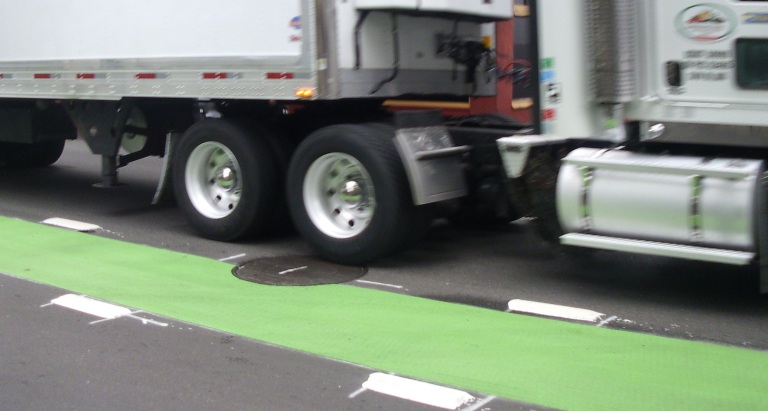 They are so good, so good, you see