The Official People who run the Eugene Celebration bestow a bunch of awards to entries in the parade. (Those awards were in the morning paper on Sunday, and I’d link to them here, but I can’t find them anywhere online).

But if they’re going to do official awards, we want to do unofficial awards. And we will. Because the great thing about having your own blog is that you can do whatever you damn well please.

So here we go.

Let’s start with the award that honors the best pedal-powered participant in the parade whom we suspect was not officially signed up.

… this guy — who lit up a smoke (look closely) as he rolled toward the Circle K on High Street on his … his … somebody tell me what you call these things. Bikes that are like Harleys, but way cheaper. And quieter, which is nice.

The Three Wheels Are Better than Two Award goes to … 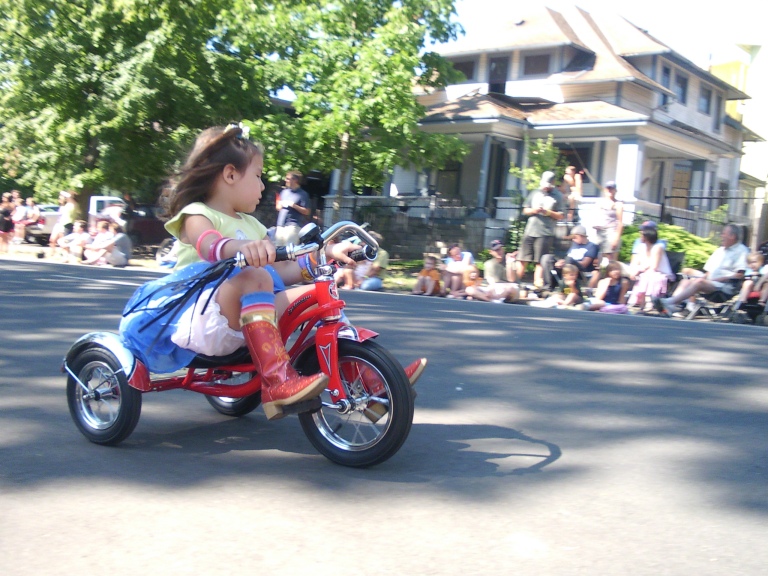 … this determined kiddo. We were watching only about five blocks from the start of the parade, so I don’t know how she was faring towards the end. But she was kicking ass right here.

It was a close call, though. We also considered those Willamette High School electric go-carts, the Arcimoto electric car and, of course, these guys …

… to whom we will give the M.C. Escher/Visual Impossibility Honorable Mention (internal combustion engine notwithstanding).

The Rudolf Steiner/Watching-the-Rest-of-the-Parade-Recede-Into-the-Distance Award honors the entry that allowed the largest gap to open up between themselves and the entry ahead of them. It goes to the Village School, which had fallen a good block behind the rest of the parade — this only five blocks in.

The Village School is a Eugene charter school that uses a Waldorf-based educational model. The Waldorf system endeavors to patiently nourish the seeds of a child’s inner motivation; tend all parts of their being, including the heart, head and hands; and encourage children to stop and thoroughly inspect any small object they might see on the ground.

So we can see how this happened. Yes, we all could learn a lot from the children. Life is not a race, people.

The Faceb00k-Amazon/Don’t-Feel-Bad–Johannes-Guttenberg-Had-a-Damn-Good-Run Award, honoring the smallest entry in the parade, goes to …

… The Register-Guard. The entire delegation of which seemed to consist of a banner and two people. We’ve all heard about the trouble in the newspaper industry, and yes, the staff is getting dangerously small over at the local daily.

… the University of Oregon! (by pure coincidence).

Milk crate! With a backpack in it. She seems to know she’s got this award all sewed up.

And finally, The Eugene Bicyclist/Best of Show Award goes to … 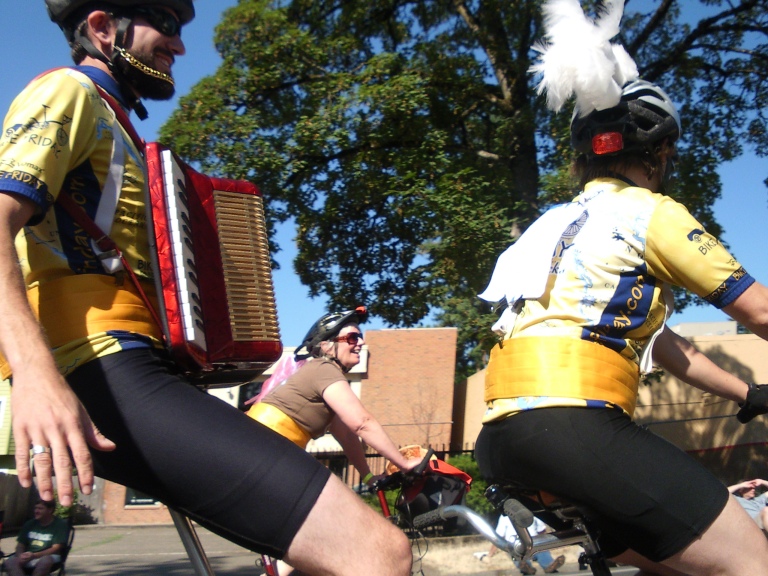 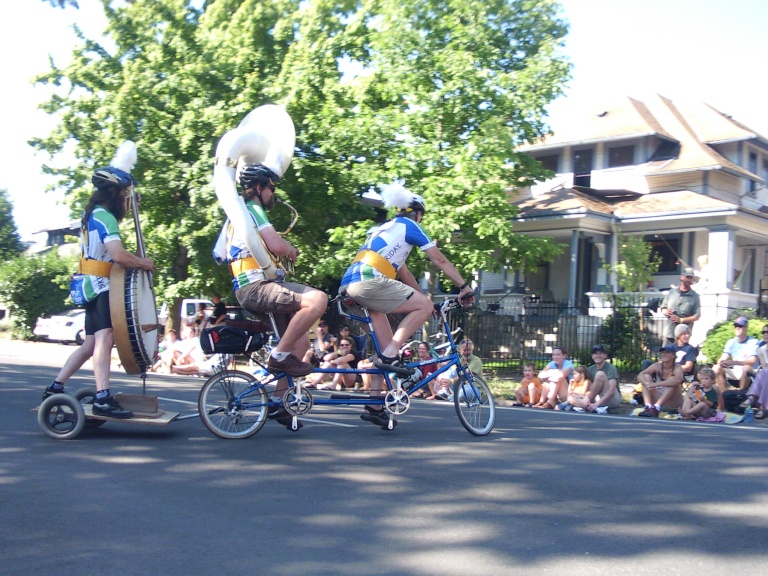 … the Bike Friday Little-Wheel Tandem Rockers, which featured a pack of tandem bikes with a person on the back of each playing a musical instrument.

We will withhold comment on the actual musicianship of this ensemble — which was performing “Daisy (A Bicycle Built for Two)” when they passed by us. But we give them huge points for concept and cummerbunds — high-visibility yellow cummerbunds.

(The Best of Show Award comes with a free Eugene Bicyclist T-shirt, which we will drop off the next time we are out near Bike Friday on West 11th. Unfortunately, we don’t have enough shirts for all members of the band, but we’ll take them an XL and maybe they can all wear it at once. Or just hang it on the wall or something.)