I know we declared a milk-crate moratorium back in July, but it was violated almost immediately. And now we will violate it again because we recently found something on the Internet that has left us slack-jawed.

The cool-hunters have discovered the cratie.

If you don’t know, a “cool-hunter” is somebody who goes out scouring the hippest urban neighborhoods trying to learn what the cool kids are doing. That somebody, of course, most likely works for a big shoe company or clothing company and stands to make a great deal of money if they discover some coolness that can be co-opted and mass-marketed.

It might be fashion (for instance, the underwear-above-the-pants thing):

We’re not sure if the underwear-above-the-pants thing is still cool. We’re not sure why it was ever cool. But then, we are not cool so we don’t understand these things.

Another example of cool-hunting might be that someone noticed that a few outrageously cool bicycle messengers in New York and elsewhere started riding fixed-gear bikes back around the turn of the millennium. And now, of course, we have Walmart selling “fixies”. Not to mention me riding one. So the coolness may be off that pumpkin, too.

That’s an inevitable result of cool-hunting. As soon as something cool has been cool-hunted, and starts to go mainstream, the truly cool people leave it behind and invent something else cool to do. As Malcolm Gladwell puts it in a 1997 New Yorker magazine article about cool-hunting: “The act of discovering cool is what causes cool to move on.”)

But now look what’s happened: You cool people who have crate bikes, you have been cool-hunted:

We found this crate for sale on the website of Dutch Bike Seattle. Here’s some of the marketing copy that accompanies the photo above:

[That’s the headline, and well, yes, we’ve always thought so too.]

Quite a while ago we saw some beautiful, sturdy plastic crates being used on bicycles.

[In other words, you were cool-hunting. And the thing is: they’re not beautiful. They’re ugly on purpose. Which is why they are cool.]

They were incredibly durable, and seemed to work very well for hauling all kinds of things. Strangely enough, no one we asked would tell us where they got theirs, so we searched high and low for somewhere to buy them.

[Have you been living under a rock?]

At long last we found someone to cast them for us, and we’re thrilled with the results.

[You found someone to make milk crates for you? The same person you found to reinvent the bicycle wheel for you?]

They’re almost as tough as a Workcycles Fr8 — and quite a bit lighter — and have the same classic “form-following-function” style. We like them best on the front carriers of Fr8s and Transports …

[Higher-risk areas? You are going to park your $2,299 Fr8 in a “higher-risk area,” and you’re worried about someone stealing the milk crate?]

Now you can have one of these without having to “liberate” it like you did when you were in college.

Well, OK, if you want to be all upstanding about it. But why not just do this … 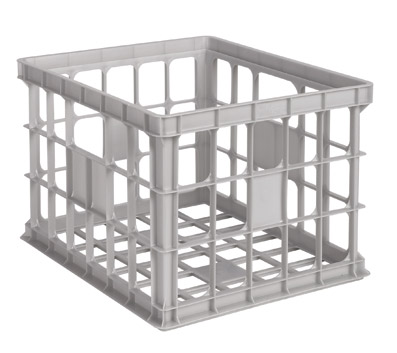 But here at Eugene Bicyclist Central we will always have a soft spot for craties that bear the stamp of authenticity. For the risk-takers: