As if anyone needs more evidence of the crate bike’s remarkable utility, we have been informed that the best way for someone on a bike to transport a coffee urn full of piping hot beverage — if not the only way — is with a cratie.

So we are proud to bring you Crate Bike Testimonial No. 1, from a real live Eugene urban-cycling mom, who e-mailed the following:

[During November’s] Kidical Mass ride, we had a cargo experience that prompted many of us to think of you. I was carrying my kids, four pies, a bunch of other stuff on my bike, so I used my Burley kid trailer to haul a large coffee maker full of hot chai to our destination.

It became apparent en route that one of our young riders was tired of pedaling her Piccolo, so I offered my trailer to her dad.  Unfortunately, the coffee maker was so large and awkward (and full of hot liquid) that the child and the chai couldn’t both occupy the trailer.

We had a sizable fleet of fancy cargo bikes present: 4 Xtracycles, a bakfiets, and at least three kid trailers. Several of these cargo bicyclists piped up right away, offering to haul the chai. But … we realized that the perfect cargo technology would be: Jon Bilenki’s cratie and some bungees. 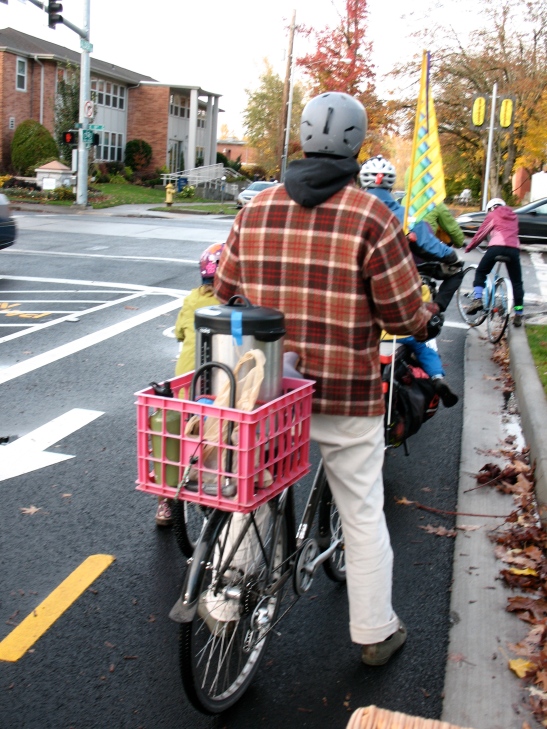 ‘Nuff said. (Photo thanks to Emily at mamafiets.blogspot.com. Here’s another shot of Jon.)

So, the December Kidical Mass ride is this Saturday (Dec. 17). Kidical Mass is a monthly bike ride around town that is family/kid/chai friendly. I keep meaning to get to one, but something always comes up.

Saturday’s ride starts at Monroe Park at 5 p.m. and will wander around checking out holiday lights. It will end at Cozmic Pizza for dinner. Details.

2 thoughts on “Crate bike testimonial No. 1 (and a Kidical Mass ride coming up)”