I’m happy to learn that the afternoon of car-free streets — known as Sunday Streets — is coming back next summer. But before I get to that, I need to tell you a story.

My daughter somehow acquired a betta fish for her fifth birthday.

Don’t be fooled by its exotic beauty. A betta fish is sometimes known as a “Siamese fighting fish” — which sounds dangerous for a 5-year-old, but I don’t like to be the overprotective sort of parent.

We set the fish bowl on my daughter’s dresser. The dresser has a mirror behind it. Luckily, we happened to pick up a book about betta fish at the library, and we learned, among other things, that bettas should not be placed in front of a mirror. It may make them think they are in the presence of a second Siamese fighting fish.

This causes their fighting instinct to kick in and leaves them living in a constant state of heightened anxiety.

Which brings us back to Sunday Streets. Sunday Streets is when the city closes a stretch of city roads to cars (for a few short hours) and lets pedestrians and cyclists and dogs and whatever else roam free on the asphalt.

Perhaps you remember Eugene’s first Sunday Streets event this past September? Was it fun, you ask? What do you mean, was it fun? You remember this guy? 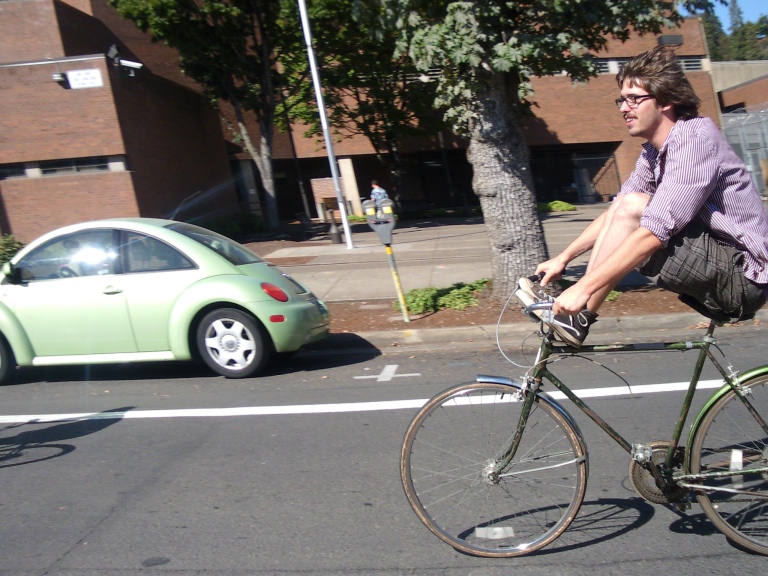 But something happened at Sunday Streets that I did not expect. The simple absence of cars made me aware that I do experience a state of low-level stress whenever I ride around on city streets. I don’t think I had even realized this until I found myself freed from it. With cars removed, I had to keep reminding myself not to be constantly checking over my shoulder or listening for the buzz of big 4×4 tires coming up behind me.

And I realized how our betta fish must have felt when we finally took him away from the mirror.

Anyway, the second Sunday Streets event is being planned for next Sept. 9. (See, we finally got the point!)

Last summer, the route was along Fifth Avenue, past Skinner Butte Park, into the Whiteaker neighborhood. This coming summer, Sunday Streets will head to the south university/Amazon area. Here’s a map of the proposed route:

In the northeast-most corner, we are at 19th and Agate, i.e. Prince Pucklers and 19th Street McMenimen’s, etc. It goes west on 19th, down the ritzy stretch of University Street to University City Park, across 23rd and 24th to Hilyard, etc. You can figure it out.