The Declaration of Independence is certainly among the greatest rants of all time. But now this, newly discovered among Jefferson’s papers:

When in the course of the daily commute it becomes necessary to mount the sidewalk for fear of death, and thus clearly evid 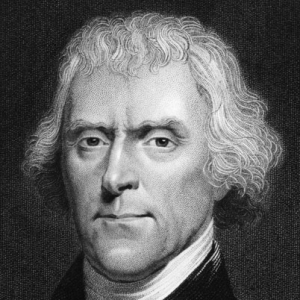 ent that the proponents of one mode of transportation must dissolve the bands that have bound them to another, and to assume separate and equal station on the roadways of the land, it is a courtesy — akin to waving a motorist through a four-way stop even though you clearly arrived first — to declare the causes which impel them to the separation.

We hold these truths to be self-evident: that bicycles are way more equal than other forms of transportation (I mean, come on!), that they are endowed by their creators with certain inalienable rights; that among these are life, dedicated cycle-tracks, and the pursuit of the hot girl on the bike up ahead, even though the light did just turn red.

Prudence, indeed, will dictate that transportation infrastructure long established should not be changed for light and transient causes, and accordingly all experience hath shown that cyclists are more disposed to suffer, while the treacherously narrow and gravely shoulder is sufferable, than right themselves by abolishing the system to which they are accustomed.

But when a long line of cars and SUVs, pursuing the same lonely fool on a bike, evinces a design to run said fool into the ditch, it is his right, his duty, to hurl a raw egg at a Hummer and run red lights with impunity.

Such has been the patient suffering of the pedal-powered. The history of the present operators of motor vehicles is a history of injuries and humiliation. Let facts be submitted to a candid world.

They have thrown at me in the dead of night a Coca-Cola cup full of ice, as well as a pat of butter, the kind you find in a pancake house.

They have right hooked me and not even bothered to stop, spinning their tires as they sped away, leaving me on the pavement with a tear in my chinos.

They have told me I do not belong on the roads, that I am bound to get run over and that it will serve me right.

They have screamed at me for no reason, as they drove past drunk and waving their arms out the window.

They have assented to the placement of “Road Construction” signs in the bike lane.

They have honked at me for “taking the lane” even though there was no other option and I was not slowing them down in the slightest.

They have suggested whatever bad thing happened, it was my fault.

They have suggested that cycling to work means you arrive at work “stinky.”

They never stop harassing cyclists for rolling through stop signs, while ignoring their own violations regarding cell phones and the speed limit.

In every stage of these transgressions we have petitioned for redress in the most humble terms — by beating our fists on their rear windows and screaming “TWO-TON KILLING MACHINE!!” and “GET OUT OF YOUR STEEL CAGE, ASSHOLE!!” Our repeated kind petitions have been answered only by repeated injury.

We therefore, the cyclists of Eugene, do solemnly publish and declare:

That these united cyclists are absolved from “sharing the road” with said assholes and that all connection between bicycles and the internal combustion engine be totally dissolved. We mutually pledge ourselves our lives, our fortunes and our spare inner tube when needed.

Happy Fourth of July, from all of us here at Eugene Bicyclist.

2 thoughts on “Happy Fourth of July: A Declaration of Bicycle Independence”