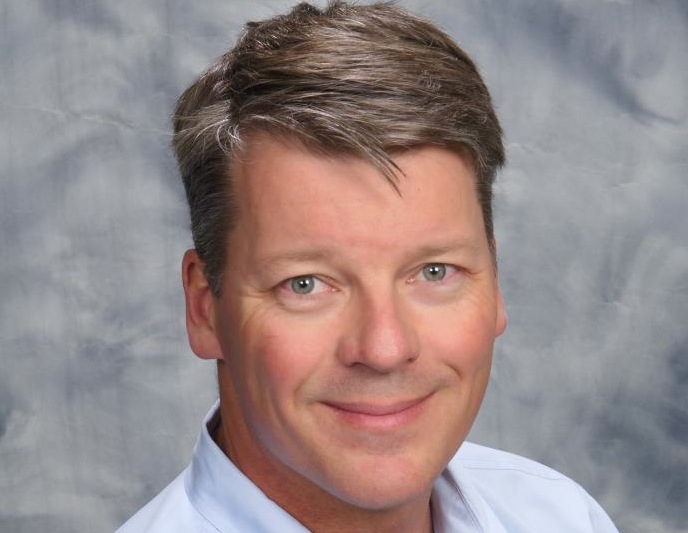 We learned some more about the cycling fatality yesterday. Police released the man’s name: James Daywitt, who apparently went by his middle name, Aaron.

He was 49 years old. He was married and had twin 4-year-old girls. He worked as a mortgage adviser at a company called Alpine Mortgage Planning, which is by Valley River Center, I think in one of those black, glass, upside-down pyramid buildings. He was a regular bike commuter.

I am so sorry for his family and friends. And my heart breaks for his kids. Jesus.

I’ll be candid. When I hear about this sort of thing, I first think perhaps the person was a transient. Homeless. Perhaps drunk. Or suicidal. Not to say the loss of that life would be any less tragic, but as details came out yesterday, they didn’t jibe with my preconceptions.

Our minds, I think, naturally try to form some explanation when something unexplainable happens.

And in the police press release yesterday, as they told us Aaron Daywitt’s name, they included this:

“Initial indications are that Daywitt may have been utilizing headphones at the time of the crash. He was reportedly wearing a helmet.”

This was picked up in the news coverage, by TV stations and by the Register-Guard’s Karen McCowan in a story in today’s paper:

“… an initial probe indicted that Daywitt was wearing a helmet and may have been using headphones when he bicycled southbound into the crossing at Hilyard Street just as an eastbound Amtrak train reached the intersection, police said.” 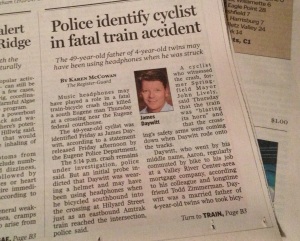 At the end of the R-G story, there’s a line saying, “people appear to underestimate the muffling effect of music device earphones” that is attributed to an Amtrak spokeswoman named Vernae Graham (this is a paraphrase by McCowan, not a direct quote from Graham).

Was it the headphones? Presumably he wasn’t wearing a blindfold, as well.

Was it a momentary lapse of attention, a little mind wandering, that happened at the worst possible moment?

Was it a fatal error in judgment — thinking he had more time to cross than he did. A wrong decision. A split second. Dammit.

I understand these things. They’ve happened to me. But I’ve been lucky.

I do think that crossing is poorly designed, too — the crossing gates don’t block the path, just the street. But you can’t blame this on that.

In the end, we will probably never know why this happened. But the thought that will linger in the public mind, I suppose, will be the headphones.

Personally, that explanation is a stretch for me. I can hear train whistles from my house, which is a mile from the tracks. It’s hard to believe headphones would prevent you from hearing a train whistle at close range. But in this case, who can know?

I’m not a fan of riding with headphones or earbuds. I’ve done it, but I don’t prefer it. Not because I think it’s terribly unsafe, but because for me it just distracts from the whole experience of riding a bike in the first place. Yes, I think it does reduce your awareness. But a train whistle?

I want to say my thoughts are with his wife and his kids. If I were a praying man, I’d pray for them. But I’m not, so I’m just hoping they have the help and support they need.

If you are interested, KEZI has a couple of stories about Daywitt and the crossing at Eighth and Hilyard. And KMTR’s Chris McKee also has a story. He reports that Daywitt’s employer has set up a fund to help his family: Call them at 541-342-7572 if you would like to contribute.

8 thoughts on “We may never know what happened: Rest in peace, Aaron Daywitt”