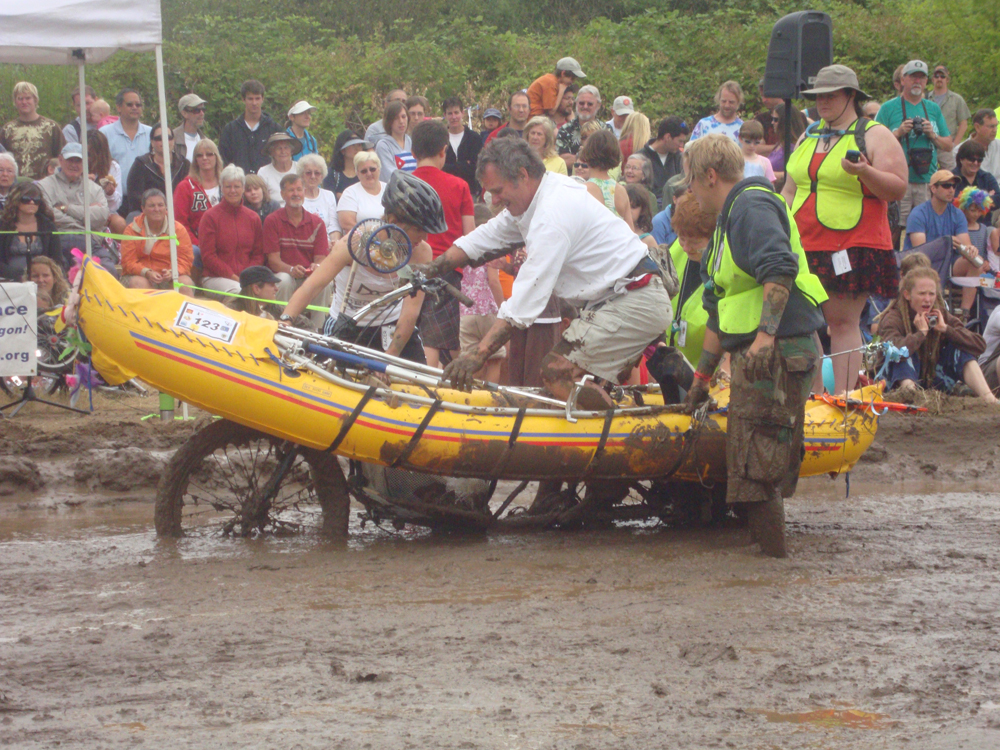 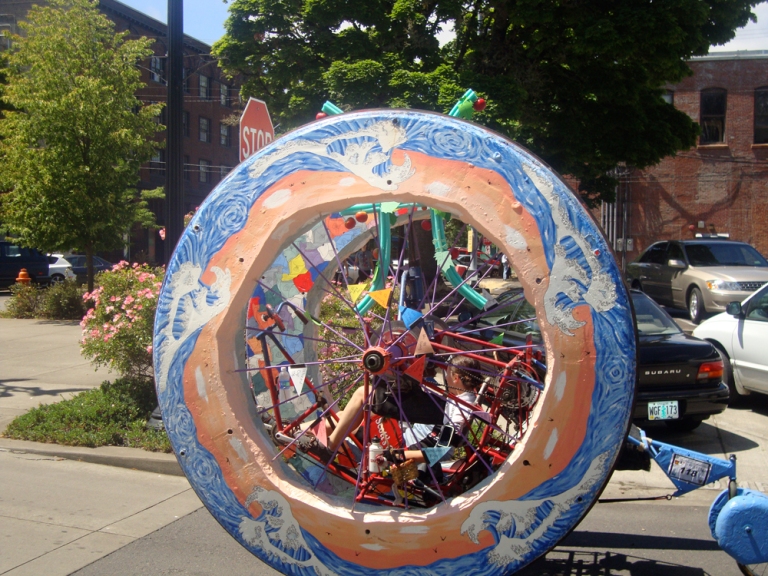 For pedal-powered wackiness, nothing quite compares to DaVinci Days, Corvallis’ premier summer festival. It’s not just the usual music and food and crafts and crap for sale. There’s a race going on. And here at Eugene Bicyclist, we love races.

Competitors have to build a human-powered “kinetic sculpture,” usually requiring copious amounts of old bike parts, a bolt or two of colorful fabric and the fertile imagination of a raging madman. Like the brilliant DaVinci himself, competitors must be part engineer … 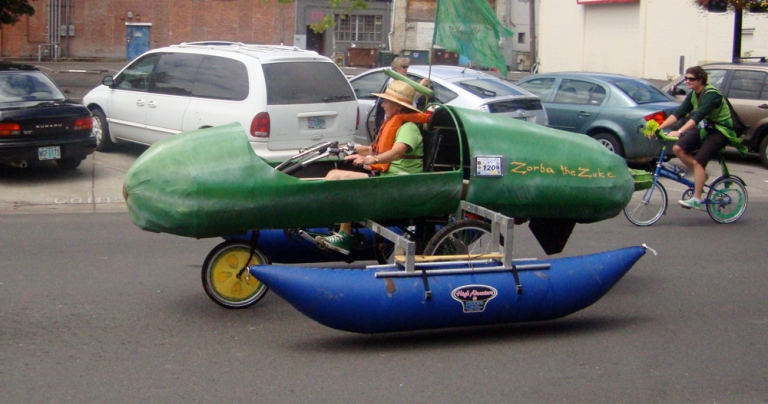 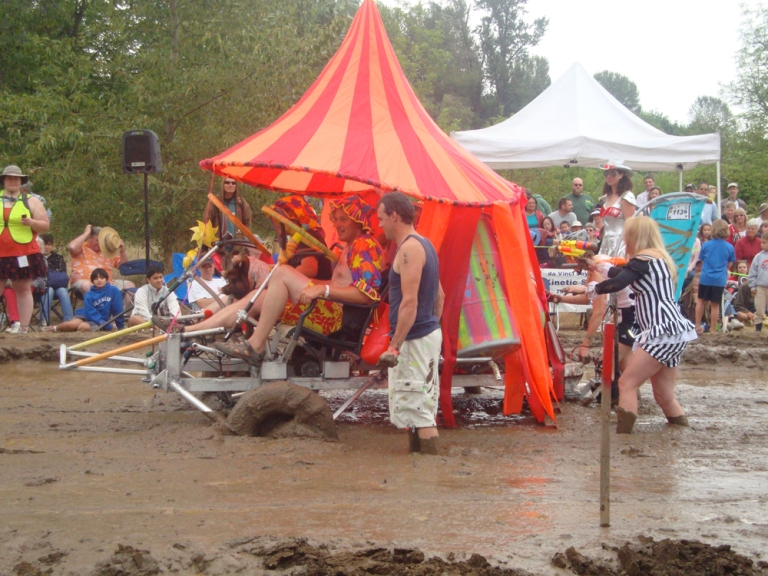 The vehicle must be able to cross land, water, sand and mud.

This is what the Oregon Country Fair would look like on a very, very bad day.

But as you are sitting there watching these intrepid folks try to do the impossible, you say to yourself, “Hey, wait, who’s that P.A. announcer wittily calling the action? Isn’t that …?” 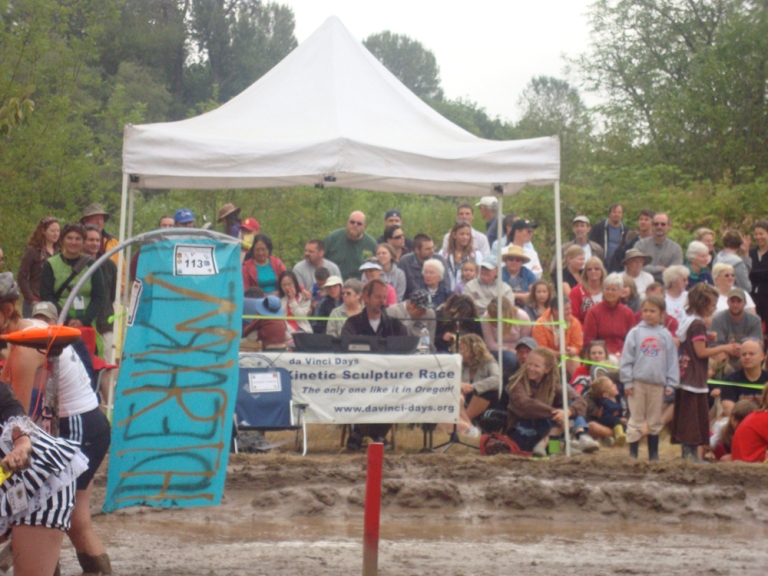 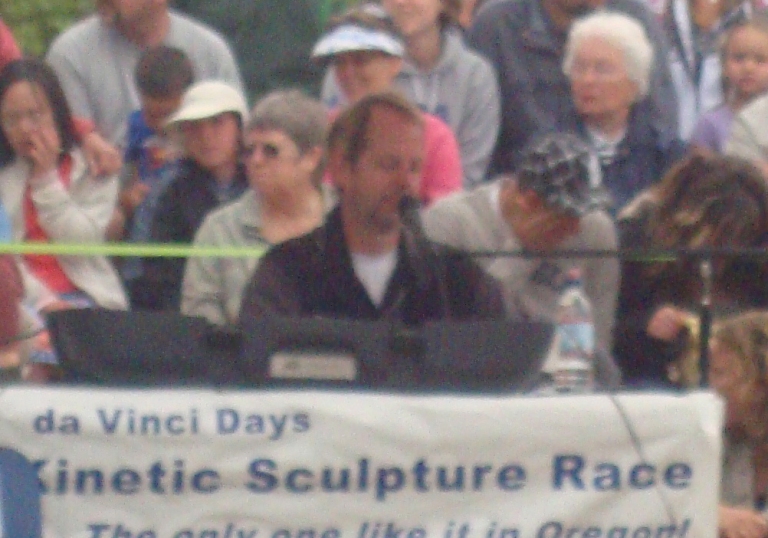 Who the hell is Don Kahle, you say? He’s one of those ubiquitous Eugene “personalities,” which is how you describe someone who keeps popping up everywhere even though they have little in the way of a discernible occupation. He is the former publisher of the defunct Comic News (where he was long suspected of being the pen behind the “Deep Dish Dinah” gossip column), one-time president of City Club of Eugene, and the somewhat regular writer of a column for The Register-Guard …

And there he was in Corvallis — two-timing his own city! For shame. Making a lot of fun of his own city, too, suggesting at one point, that we cant punctuate down here in Eu;$ene, But; who can — blame him@ For all the charms of the Oregon Country Fair and the Eugene Celebration, DaVinci Days really has a little more meat on its bones — at least for a failed physics major like me.

And if you ever go, take your bike. The festival is spread around town, and it’s easier and faster to get around by bike. More fun, too. You can even ride along with the “sculptures” during part of the race. And don’t be afraid to take your milk crate. There’s lots of milk-crate love in Corvallis too, I discovered.

These crates look as if they are preparing to create offspring, which may explain a lot of things. But at least they are responsibly protected with his and hers reflectors.

Anyway, I have to say that Eugene certainly isn’t out of the running when it comes to the unlikely use of pedal power. I happened through the Whiteaker the other day and brought myself to a skidding stop at about Third and Monroe.

Hmm. An entry being prepared for the Eugene Celebration parade perhaps?

Or maybe it’s a leftover prop from Woody Allen’s “Sleeper”?

But I’m not sure. The more I examined this thing, the more I started to think, wait, this is somebody’s home.

This may be one cyclist’s answer to the Airstream travel trailer. A luxury pedal-coach! 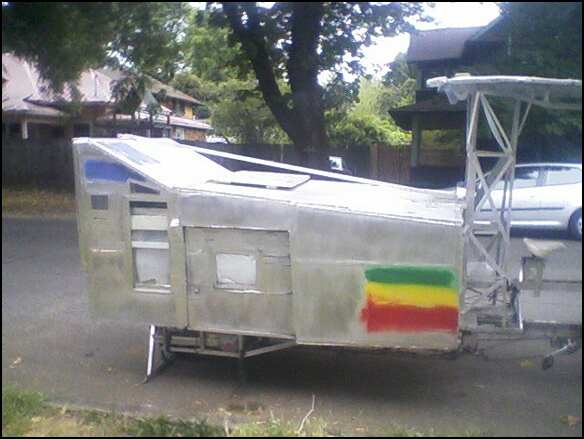 Aside from being a blinding hazard on a clear sunny day, we have to admire the creativity and gumption involved in the creation of this … wait, should we call it that? Yes, let’s do, as no other word does it justice …this “kinetic sculpture.”

Speaking of motors and pedals, it was with great sadness that I purchased a tank of gas the other day, before driving to Corvallis for DaVinci Days. But I was balancing my checkbook and realized the previous tank of gas I bought came on June 13, when we drove out to the coast for the day.

So that’s five weeks on one tank of gas. Not bad, I guess, though as Eugene goes, I’m pretty sure that ain’t nothin’. And I’m sure the guy sleeping comfortably in the luxury pedal-coach would agree.

5 thoughts on “A higher level of pedal-powered wackiness”