That last Q&A session was fun. Can we do it again?

Sure. What’s your question?

Have you noticed these?

I have. They just painted them all over the sidewalks in downtown Eugene. My wife said she noticed some guys out stenciling them onto the concrete not long ago. Psssssshhhht! Big cloud of white paint. Voilà!

The stenciling is very nice, but is there is something about these that seems not entirely clear?

That’s what I was thinking.

Has there been some mistake?

They were stenciled upside down. That is, they would appear to read properly to a person who is already actually on the sidewalk and heading into the street, when in fact, they should actually read the other way, because it is illegal to ride your bike on the sidewalk downtown.

Well, we all make mistakes, don’t we?

Did the city fess up to this mistake?

Yes, they were very honorable about that.

Were there any places where they got them oriented properly?

Yes. Here, for instance. By the library: 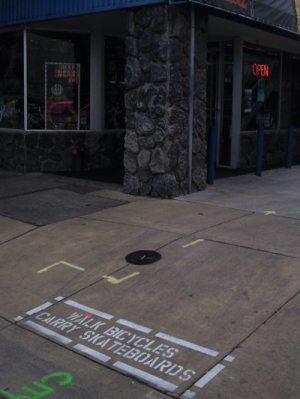 You can read that right-side-up as you ride your bike from the street into the alley. And here, similarly, entering the alley by Hutch’s bike shop, this one is oriented properly.

They got them right-side-up when they painted them in front of all the various alleys.

I see. So, is it illegal to ride your bike in the alley, too?

No. It is not illegal to ride your bike in the alley.

So why did they stencil these admonitions in front of the alleys?

That was another mistake.

And did they fess up to that one, too?

What are they going to do about those mistakes?

They are going to dust themselves off and try it again.

That’s what I thought, too.

By the way, before you noticed all of these stencils did you know it was illegal to ride your bike on the sidewalk in downtown Eugene?

Wow. I wouldn’t have guessed. Is it otherwise legal to ride a bike on the sidewalk in Oregon?

In Oregon, it is legal to ride a bike on the sidewalk, though the law spells out a whole host of conditions and exceptions. For example, you must courteously yield to pedestrians, ride slowly and … well, then there is the following. It seems to be a condition or exception of some sort. But I can’t be sure since it is one of the most poorly written sentences I have ever encountered:

This paragraph does not require reduced speeds for bicycles at places on sidewalks or other pedestrian ways other than places where the path for pedestrians or bicycle traffic approaches or crosses that for motor vehicle traffic. — Oregon Revised Statutes 814.410(1)(d)

What does that mean?

It means we have a citizen Legislature.

And there is no requirement that a candidate for office actually be required to know how to read and write?

Absolutely not. In fact, anyone who can read and write prolly ain’t got no common sense.

So do you think these stencils will actually stop people from riding on the sidewalk? I mean, even when they get them turned right side up?

Well, let’s go out and have a look. Here. Over by Kiva:

That’s a stenciling there on that corner. And perhaps this woman is not adept at reading upside down. But I’m thinking people will do as they please.

Do you think bicycle cops will set a good example?

I do. Here’s a fine example of a bicycle cop riding on the sidewalk:

I think it is. Or one cop with a second head growing out of the top of his helmet. But I’m pretty sure you’re right, because bicycle cops almost always travel in pairs.

Are they mating pairs?

So those bicycle cops were in the “no-biking-or-skateboarding-on-the-sidewalk” zone?

They were. They emerged from Hutch’s bike shop, said a very cordial “hello” to me as they rode past me and my baby stroller and then headed south on the sidewalk toward the library.

Why were they heading toward the library?

Perhaps they were going to study up on the law.

Hey, speaking of skateboards, do they have skateboard cops?

How about rollerblade cops?

Is it legal to rollerblade on the sidewalk?

Good question. I don’t know. It might be considered an undue hardship to have to unlace your rollerblades and “walk” them every time you were about to enter the sidewalk. But even if it were illegal, I think it might not matter much, don’t you?

… as we can see from this guy, who is about to roll right up onto the sidewalk. And who then did so, as he headed up Willamette Street to the Hult Center for roller derby.

They have roller derby at the Hult Center?

Times are tough in the arts, so they have to make ends meet somehow.

Hey, the wheel is a really great invention, isn’t it?

One of the all-time greats.

In general, do you personally think it is a wise thing to ride a bicycle on the sidewalk?

In general, no. I think it is often unsafe. But there are times when I’d just look the other way.

I think it’s OK then.

But why do you think it is often unsafe?

There are often pedestrians on sidewalks, for one. Baby strollers. Kids. Street musicians. Panhandlers.

And I think it’s dicey watching for and dodging a car that is pulling out of — oh, let’s say — a Wendy’s drive thru as its operator tries to unwrap his double cheeseburger and stuff a large portion of it into his mouth.

At that point he may not be expecting a relatively fast-moving object (i.e., a cyclist) shooting off the sidewalk into the driveway. And he may not be diligent about actually checking for one.

Which is probably why the law includes this:

A person commits the offense of unsafe operation of a bicycle on a sidewalk if the person … operates the bicycle so as to suddenly leave a curb or other place of safety and move into the path of a vehicle that is so close as to constitute an immediate hazard. — ORS 814.410(1)(a)

And a person should remember — as a person moves into the “path of the vehicle” and commits this infraction — that as a Class D Traffic Violation, this results in a rather mild punishment. Especially if a person compares it to the consequences of actually “moving into the path of the vehicle.”

It’s rather like a law that would deliver a $30 fine for hitting yourself in the head with a framing hammer?

By the way, is this the first time they have painted these admonitions on the sidewalks?

No. They did it long ago. If you scour downtown sidewalks carefully, and you are lucky, you can find traces of rock art created by the ancient ones.

Really? Do you have any pictures?

Yes. Here is a valuable and delicate remnant, over by the Park Blocks: 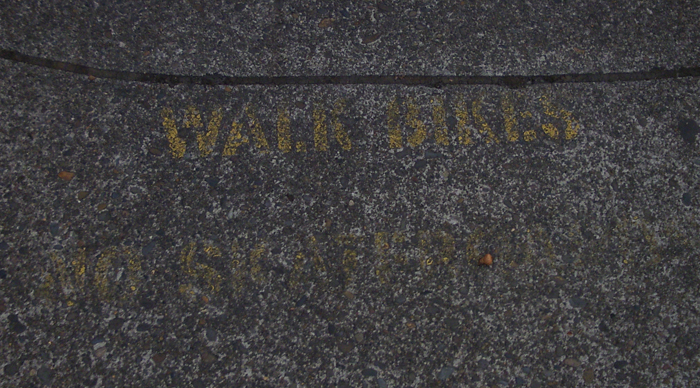 What does that say?

I believe it says, “WALK BIKES NO SKATEBOARDS”

Did the ancient ones make mistakes, too?

There is no evidence of that.

I notice the wording today is a little different from the ancient ones’.

Yes, well, the word “no” is a little harsh. We wouldn’t want anyone to read that and think you could not have a skateboard at all. But skaters were institutionally discriminated against back in those days. The new wording, “WALK BIKES CARRY SKATEBOARDS,” puts the two on more equal footing perhaps.

12 thoughts on “These sidewalks were made for walking”