I spend far too much time on Coburg Road. If you are similarly afflicted, you have probably noticed that a construction project has begun there.

EWEB is digging up and replacing an unreliable 50-year-old water main in the southbound side of the road from Oakway Street, by P.F. Chang’s China Bistro, up to Harlow Road.

Then, when EWEB is done, the city is going to repave Coburg Road from Oakway to Willakenzie, as the pavement is starting to crumble. The repaving will start probably in May.

So get used to it. It’s going to be going on for a while.

Fortunately, a lot of this construction is happening at night, so those of us who work banker’s hours don’t have to contend with detours, backhoes and general confusion.

There is, however, a stretch of the bike lane by P.F. Chang’s that was dug up last week and then patched.

I am by no means an expert on asphalt-based construction, but my layman’s assessment of the patch would be … well, let’s put it this way: If this patch were a bicycle seat, it would be something like what you see at right.

I asked EWEB about this. In an e-mail, they did seem to agree that perhaps this was not their best work. They said that they plan to replace this patch with a smoother one soon, well before the city repaving begins.

And, if an e-mail can give off a whiff of exasperation, I think I caught one, as they went on to say: “EWEB is doing the best it can under very difficult circumstances. A little understanding and patience from the cycling community would be much appreciated.”

If that sounds a little defensive, well, I for one am willing to admit that the “cycling community” has been known to be — shall we say — “snappish” about such things from time to time. 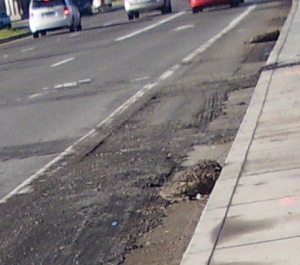 Is this a serious hardship? Not really. Am I a patient and understanding person? I like to think I am. Would I want to be out there working from 9 at night to 6 in the morning? I would not.

Anyway, I’d just advise you to watch out for the gravel and those weird sacks of bark chips in the gutter. I don’t know what those are for. Maybe they are like the hay bales that they put up at a criterium.

If you do happen to be out there at night, you will find that cars, bikes and anything else that comes trundling south down Coburg will be diverted into one of the northbound lanes through the construction zone.

In a few weeks, when the project gets up by the residential neighborhood around Harlow — they don’t know exactly when that will be yet — the construction will be happening in the daytime, so it may be more of an issue during regular commuting hours.

As long as I we are on the subject of Coburg Road and complaining about not terribly consequential things, I thought I’d inquire about Starbucks Pond. If you are on this road regularly, you surely know Starbucks’ Pond, which sits year-round in the bike lane out in front of the Oakway Starbucks: 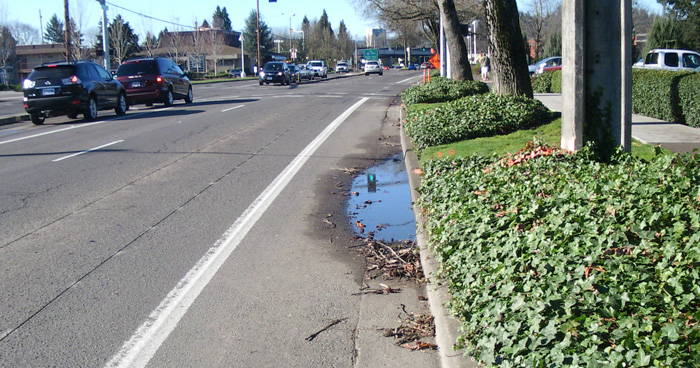 It is sometimes bigger … 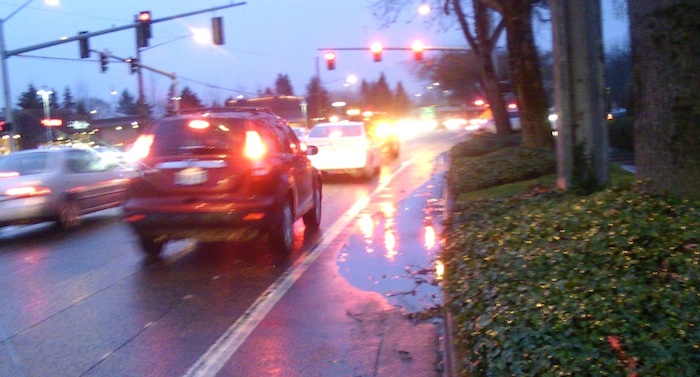 … sometimes smaller, but always present — even in the blistering days of July and August.

Starbucks Pond, as you may recall from high school English class, is the bucolic body of water on whose shores Henry David Thoreau undertook his two-year experiment in “simple living” back in the 1840s. It was where he wrote much of his masterpiece, the book inexplicably titled “Walden.”

Development being what it is, Thoreau probably wouldn’t recognize the place anymore. But the calm and lovely waters of Starbucks Pond remain.

Curious as to their source, I first contacted the company that owns and manages Oakway Center. They promised to have their “maintenance team look into it.” But they also pointed out that the strip of grass between the road and the sidewalk, where perhaps there could be a leaky sprinkler line, is the city’s responsibility.

The city in turn promised to send in the “irrigation crew for further investigation.”

And, finally, I checked with EWEB, just in case the water was coming from that old, flaky water main. They said they had no knowledge of that but offered to “forward this to our troubleshooters.”

So the headwaters of Starbucks Pond remain a mystery for now, but rest assured that I have added another meaningless task to the to-do lists of people who probably have much better things to do.

I feel sort of bad about that.

6 thoughts on “Happenings on Coburg Road”