I am so ashamed. I spent last week — the week of Eugene’s “Business Commute Challenge” — logging 1,800 miles in a minivan, burning tankfuls of fossil fuel.

We traveled to Missoula, Mont., to witness a college graduation in the family.

Yes, like Eugene, Missoula is a college town — home to the University of Montana. Also like Eugene, it seems to have lots of bikes.

And at first glance, Missoula bikes seem a lot like Eugene bikes. 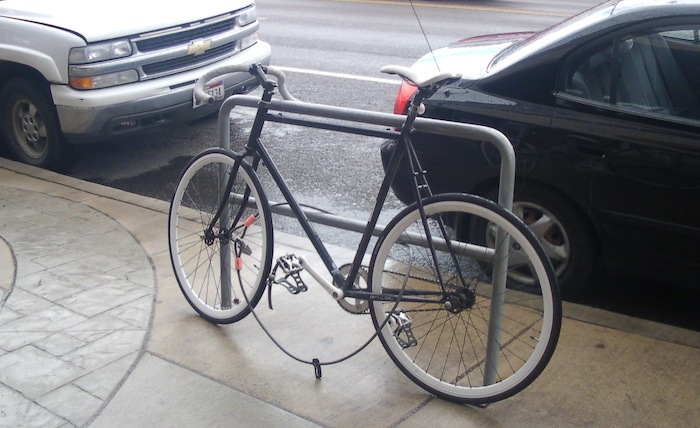 And this ingenious homemade cargo bike …

And in what was the shining highlight of the trip for me (my dear niece’s graduation from college notwithstanding, of course) Eugene Bicyclist got to ride in the throne!

That’s my brother doing the work. That’s me looking not-quite-relaxed in the back. And this was before he hit the curb. It was OK, though. The trailer weighs several thousand pounds and would be hard to flip.

But it was this trailer that opened my eyes to the vast cultural differences between Eugene and Missoula.

It was built, he told us, for “mountain-bike hunting.” As in: riding up into the hills, shooting a deer, tossing the carcass onto the bike trailer and pedaling home.

It’s important to get out of Eugene every once in a while and get some perspective.

I also learned that the guy who built the trailer — a super friendly and gregarious fellow, by the way — was a Ph.D. student studying the sexual habits of fungi before he dropped out (too much politics in academia, he decided).

He said he was thinking about moving out of state, but he liked Montana because of the hunting laws — or lack thereof. “You can shoot whatever you want in Montana,” he told me.

“You can hardly go around the block in Montana without buying a gun,” another Montanan said to me the next day. He was telling a story about a woman he knew, who tried to register a gun that was given to her as a gift and the troubles that ensued. Convoluted gun laws. All that. “Every once in a while, those right-wing conspiracy nuts are right about something,” he pointed out.

This discussion, by the way, happened at a barbecue where I:

That’s not a cheetah. That’s a bison head, sitting out to be picked clean by bugs, worms and vermin so it can be used eventually as slightly less gruesome indoor decor.

One night during our stay, we stopped in a pizza place downtown. Missoula has what looks like a healthy, thriving downtown — where unlike Eugene they have kept the nice old buildings.

After being seated, I looked up to make sure my kid was happy in the high chair and in the background …

… yikes — more guns! Cold Steel Reign, it turns out, is a “post apocalyptic Wild West” Internet role-playing game. Which is something I did not know. (Silly kid — she thought I was taking a picture of her!)

I also spotted this camouflage spray-painted mountain bike locked up outside the local Holiday Inn:

They even did the crank arms, but I don’t know what’s up with the blue rims.

I must say I liked Missoula a lot. And I don’t even own guns.

5 thoughts on “We go now to Missoula, which is like Eugene but with guns”