There’s new bike “infrastructure” going in all over the place. We have new sharrows and a new green bike box — about both of which I’ll have more to say later. But for now, let’s talk bike racks.

With fall fast approaching, the deer have descended from the high country of the south hills to find warmer grazing pastures in the lowlands next to Kiva — probably to the great relief of anyone trying to grow a vegetable garden up on Fox Hollow Road.

Here is our lovely family of deer, being admired by a passerby.

If this were Missoula, Mont., the eight-point buck would already have a bullet hole in it. But this is Eugene.

Yes, this is one of three new on-the-street bike parking areas going in downtown. In urban cycling circles, they call these “bike corrals.” A bike corral involves the city commandeering one automobile parking space and converting it into parking for — I don’t know — maybe 20 bikes.

This one may not handle 20 bikes — probably more like 10 — but what it lacks in pure efficiency it more than makes up for in fun and confusion.

As I pulled up on Tuesday afternoon, here at Olive and 11th, there were no bikes locked to the deer, as you see. One woman said, as she walked past, “Is it a play pen?”

Just leave your kids there while you run in for some groceries!

“Are these art? Or bike racks?” she asked me. Very no nonsense.

She nodded matter-of-factly and without further comment started locking up her bike.

As with many things like this, it often takes just one bold person to get the ball rolling.

Within two or three minutes, it looked like this:

I will be honest here. When I first saw the model for these racks, I had my doubts. But I think I like the final product. There’s something about deer on Olive Street that has a weird calming effect.

The other new public art/bike corral that is already in place is outside Morning Glory cafe, at 450 Willamette St., right near the Amtrak station.

This one is shaped like half of an enormous bicycle wheel, with a bunch of signs that have distances to various Eugene landmarks — Autzen Stadium, Amazon Park, etc. 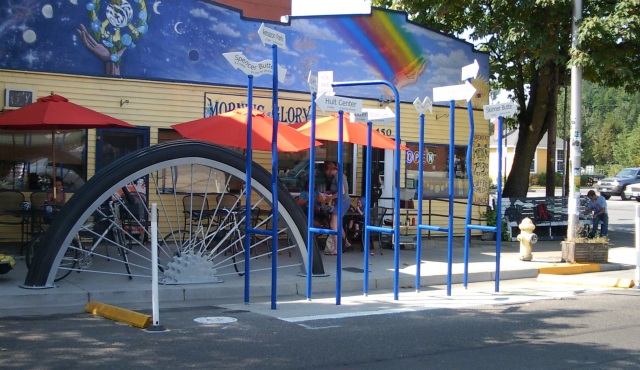 It reminds me of one of those old Margaret Bourke-White photos of the giant gears and wheels of industrial society. I’m going to call this one Margaret’s Rack. On second thought, that’s probably no good. How about Margaret’s Wheel?

There will be, I’m told, a third corral going in soon in front of the Cornucopia near Pearl and Fifth.

Meanwhile, the city has sent out a press release saying that at 10:30 this morning (that’s Thursday, Sept. 8) at Margaret’s Wheel, “the corrals will be ‘inaugurated’ with their first bike locking.”

After the ceremonial locking, people will ride over to the Kiva and shoot the deer — shoot them with cameras, people, cameras!

Well, it’s not the really the first bike locking — as we just saw. But it’s going to be a big official thing where people will make some speeches and whatnot. Like a ribbon cutting ceremony. You know, those ribbon-cuttings where they use those really BIG SCISSORS:

I hope they have a really super big-ass U-lock?

By the way, if you’re interested, the R-G has a story today with background on who created the racks — along with some better photos than I shot.