A while ago, New York City police apparently cracked down on cyclists by issuing a bunch of tickets for failing to use the bike lane. In response, there was that funny YouTube video about staying in the bike lane at all costs. As that video was going viral, someone e-mailed Eugene Bicyclist Central wondering if cyclists in Eugene got ticketed much for failing to use a bike lane.

I responded — way back on July 26 — that, no, that didn’t seem to be the case. There were  two citations issued for failing to use a bike lane in the 13 months from May 2010 to May 2011. (If you were one of those, you are in rare company. Please e-mail me immediately.)

But this question got me wondering: Do cyclists in Eugene get cited much? And if so, what for? So I asked the police for some statistics and then made this fancy little bar graph. 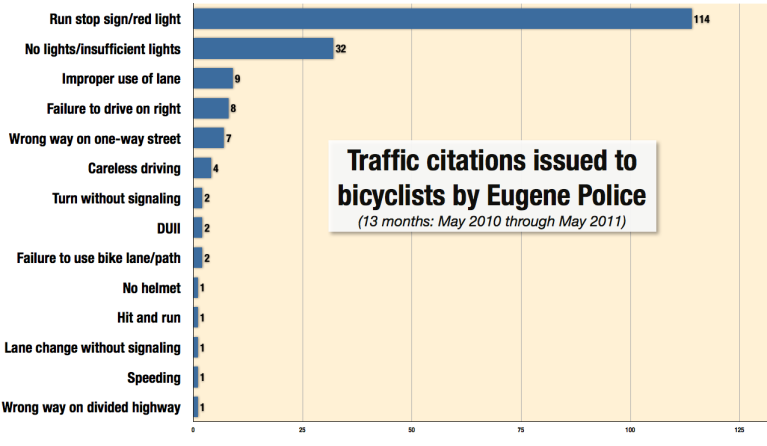 I’m not sure why EPD delivered the data for this rather odd range of time, but I don’t think it matters much. It is probably a representative sampling.

Most of those citations are self-explanatory, I think. But here are a couple notes of explanation: 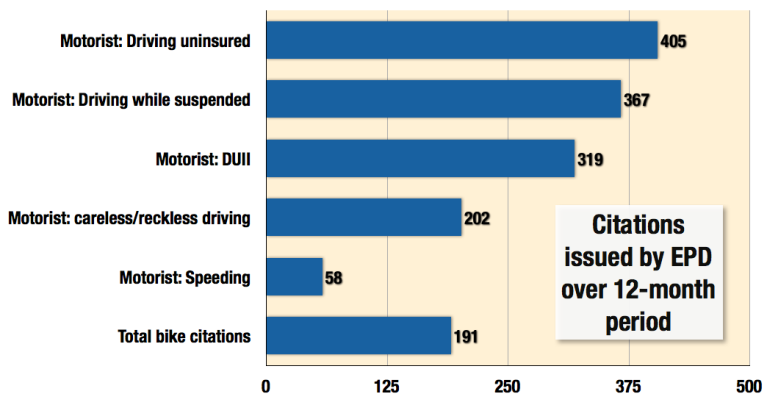 I don’t think we can say the number of citations issued necessarily corresponds to the frequency of the violation. But it may say something about the police department’s priorities. So I’m happy to see drunken driving near the top of the list. I don’t know about you, but it was alarming to me, how many people seem to be out there driving while suspended.

Anyway, if you’ve ever gotten a ticket on your bike, tell us about it in a comment.

12 thoughts on “What do bicyclists get traffic citations for?”