Trying to determine whether you good people would be better served today by news or nonsense, I’ve decided to flip a coin. Heads it’s news. Tails it’s nonsense.

Yay! Nonsense it is! That’s good because it’s getting to be election season, and the more nonsense the better.

Let’s start off with a new feature: Urban Cyclist of the Week.

This guy appeared to be drinking an actual tall-boy as he cruised through the intersection of Olive and Broadway on his low-rider. And his shirt matches his frame, which in most cases might be no big deal, but in this case … Then there is the hat, the boots, the pocketed iPhone. All around, a summer evening the way it was meant to be.

And as you can see he appropriately takes the lane behind the minivan as he cools his parched throat.

I know, I should not be encouraging such behavior, tacitly condoning dangerous and illegal activities by publishing photographs in lighthearted admiration.

But if you’re going to be that way, you belong at a City Council meeting, not here.

What else have we? Let’s rummage around in the photo archives. Ah, yes. Do you ever find yourself walking around like this guy? 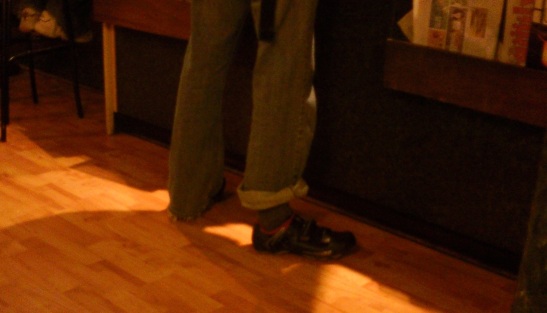 We think this is a good sign — for the sake of “the cause.” It is quite acceptable in Eugene to walk around freely with one pant leg partly rolled up or to stand examining the chocolate bars in Kiva while remaining securely helmeted. You will not be harassed or even looked at funny.

Yes, now for the Notable Bike of the Week, spotted — as usual — outside the Eugene Public Library (a long time ago, judging by the fact they are just laying the foundation for the new LCC building): 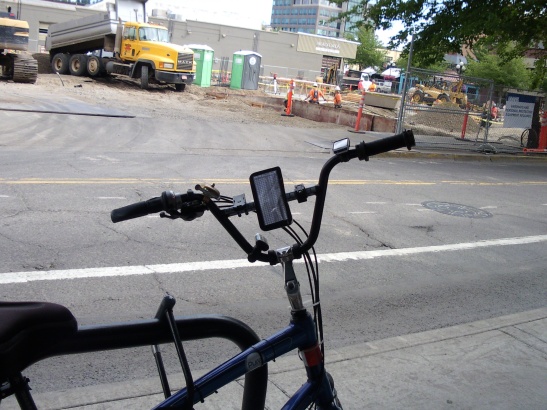 Let’s move in a little closer: 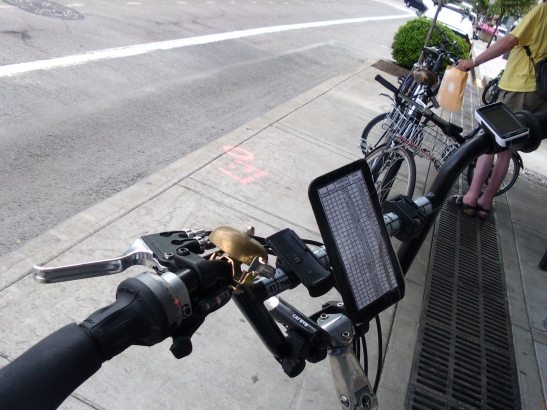 Do you know what that is?

Gracious, that’s a gearing chart! It shows the distance traveled per pedal revolution as well as gear-inches for 27 different chainring/cog combinations. And it is carefully arranged from easiest gear at the top to hardest gear at the bottom.

We think this is a “teachable moment” so let’s pause for today’s edifying lesson in bicycle technology. Actually, I think there are four main lessons we can take away from this:

4 thoughts on “Our inaugural Urban Cyclist of the Week, and other nonsense”