Oh, no. I recently came upon a blog post headlined “How to Talk to a Conservative About Cycling.” It is written by one Tom Bowden, who describes himself as a bicycle commuter, cycling advocate and “pretty conservative” corporate lawyer from Virginia. It’s fine, as it goes, delivering such helpful advice as:

He doesn’t say so outright, but the fact that he has written this post would seem to acknowledge that there is indeed some kind of backlash brewing against cyclists — at least out in the wackier reaches of the political landscape.

The reason I say “oh, no,” is that I just wish this all wasn’t happening (as I wrote not long ago). I was happier when cycling was mostly confined to one of three realms:

This left cycling happily by the side of the road when it came to politics. These days are ending. In fact, I think the reason some people are so bent out of shape about cyclists is the very fact that cycling is growing outside of said realms. And in doing so, bicycles have found themselves tethered to political issues such as global warming, terrorism and war, not to mention the epidemic of milk crate theft.

So, we’ve gone into the mud bog. Look, I promise I’m going to just get over it. It was bound to happen. It’s probably a good thing in the long run.

But how to respond to this changing landscape? The “How to Talk to a Conservative” post got me thinking. Sure, I can do the things Bowden suggests. I can say that cycling saves money, is good for my heart and reduces our need for Saudi Arabian oil.

But I don’t see that convincing the kind of people we’re talking about here. For them, when it comes to foreign oil, the sentiment is more “drill, baby, drill” than “pedal, baby, pedal.”

I don’t think these people’s criticism of cycling is really about cycling at all. I’m not sure that is is the bicycle itself that raises their ire. I’m sure many of them rode bicycles themselves back when they were 10 years old and developing their superior work ethics by tossing newspapers onto front porches.

No, I think the backlash has to do with a sense that the increasing tide of “urban cycling” may be saying something unkind about their own way of life — a way of life that includes a warm coziness with the device known as the internal combustion engine.

Let’s think about the internal combustion engine and all that it represents: It is loud. It is smelly. It is powerful. It makes possible NASCAR — not to mention the M1A2 Abrams battle tank (which, astoundingly, weighs 70 tons and can go 42 mph). But this is AMERICA! And we have earned it all, dammit.

So. Contrast this with the bicycle. How wimpy, cheap, quiet and humble it seems. A sorry wallflower.

I mean, you can dream about everybody getting on board with this sort of lifestyle:

You know, rolling on down to the farmers market to pick up a head of lettuce. You could even try to entice your conservative friend by pointing out — if you didn’t think it crass and shallow to say so — that pedaling a bicycle has beneficial effects on the appearance of one’s legs. But it probably is crass and shallow, so we won’t mention that.

But none of this will do us any good in coaxing them over into the bike lane. And that’s really what we want, isn’t it? Because, dammit, we don’t want to simply talk to them about cycling. We do, in fact, want to tell them how to live their lives.

So, being the pragmatic sort that we are here at EugeneBicyclist, we think it is sometimes necessary to engage our enemies using the fine art of political compromise.

This approach may offend the highly principled or more militant among you. But, look, would you rather keep your principles, or get something done? Go ask the president about that.

Yes, unsavory as it may be, I think we have found our way forward.

There I was tooling out Highway 99 a few weeks ago, thinking about what to get for that hard-to-buy-for conservative on my Christmas shopping list, and … bingo! 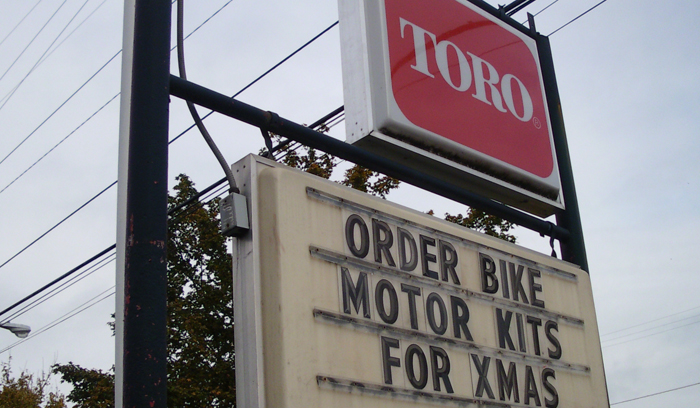 (I’m even going to forgive the fact that the shop offering these kits is chock full of leaf blowers, that’s how far I’m going to cast aside my principles.)

By the way, I was out here this past weekend, a full week after Christmas, and the marquee still said: “ORDER BIKE MOTOR KITS FOR XMAS.” So it’s not too late.

The other really great thing about this shop, which is called Emerald Power Equipment, was the note taped helpfully to the front door:

If you can’t read that, it says: “PLEASE LEAVE MOWERS OUTSIDE.” Lest your the kind who doesn’t go anywhere without your mower.

But let’s get back to motorized bicycles. I do encounter these around town occasionally.

This summer, for instance, I was on High Street, getting ready to turn right onto Fourth Avenue, to head toward the EWEB building. A motorized bicycle crossed the intersection in front of me.

Without really thinking, I charged after him. Why? Because he was there. And because I am that way sometimes. And because he had a motor on his bike!

When we got onto that little rise right in front of EWEB, as the road bends up toward the Ferry Street Bridge, I decided to launch my attack. 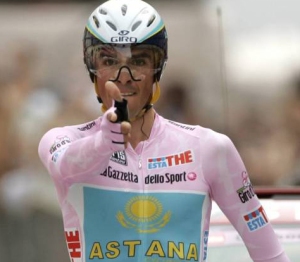 I sailed past him like I was Alberto Contador — which I am pretty sure I am not, based among other things on the fact that my Spanish is halting and I do not generally like to pretend that my finger is a pistol.

(By the way, maybe we could work this gun thing into the way we talk to conservatives about cycling. “The best cyclist in the world likes to pretend he is pulling out a handgun and shooting things whenever he wins a race,” we could say. Even Sarah Palin would have to make a special place in her heart for this brazenly un-P.C. victory salute.)

Want some more of that? Make my day! 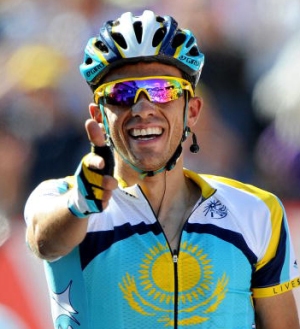 Anyway, passing a guy with a motor on his bike does make you feel pretty good as you head off to work. Here he was, just I prepared to attack …

You can see he also appears to have in his basket not a lovely verdant head of lettuce, but a spare fuel can.

Sadly, though, my attack, did not last. As I came down the north side of the bridge, having lost the advantage of the small climb, the dude on the motorized bicycle passed me — although at this point he was out in the street, and he went roaring past out in traffic on the Ferry Street Bridge. He ended up taking the on-ramp to the I-105 headed toward Springfield.

Now, if you’re curious about riding a motorized bicycle, here’s another guy I spotted not far from downtown, at the big Methodist church by Charnelton and 14th. He offers a fine demonstration.

Step 2: Fire it up, ejaculating a satisfying white cloud of fine particulate matter and CO2.

At this point, he saw me shooting his photo and offered a peace sign, a clear indication that this strategy of togetherness is indeed working already. Or … maybe that’s some kind of gang sign. Whatever …