In the Tour de France today, the race detoured into Italy in order to ride on a really bad road. Riders ended the stage by heading up and over a sharp summit called Côte de Pramartino — a steep, narrow, twisty, potholed strip of pavement.

At least three riders went off the road, one being Thomas Voeckler, who is currently wearing the yellow jersey as the overall leader of the race. He missed a turn and veered into a small parking lot. He looked like he was going to stop and pick up a six-pack and a bag of chips, maybe.¹

But in the end, the day was won in glorious fashion by a Norwegian cyclist named Edvald Boasson-Hagen. Which is a fantastic name.

Fortunately, in Eugene, we don’t have to leave the mother country to find bad pavement.

And today’s route of Le Tour de Milk Crate took us up and over the dangerous Côte de Fern Ridgino. Here, a rider concerned about the press fixie coming up behind her nearly veers off the treacherously narrow, crack-riddled path. 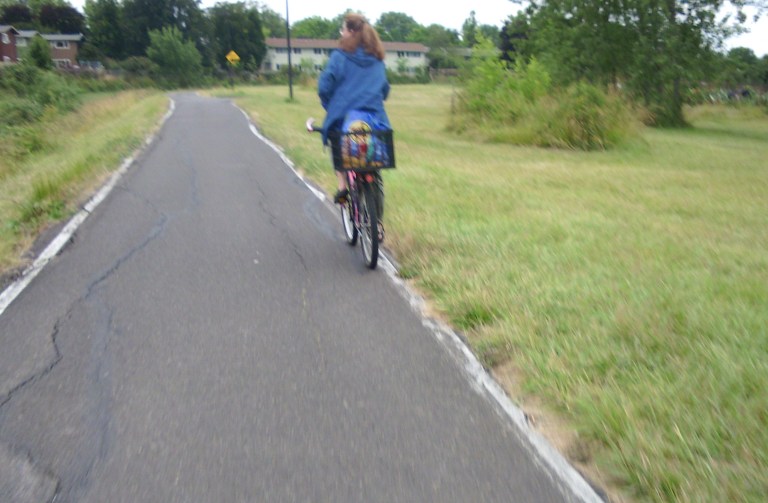 (which is possibly due for repair this summer, we should mention. In the interest of being fair and balanced. Which we rarely give a damn about, actually.)

And today’s dangerous route also brought trouble for the rider currently in possession of the “I-need-all-the-help-I-can-get-to-avoid-being-hit-by-a-car” reflective safety vest. Here, entering a construction zone, she veers into the parking strip and onto the sidewalk, losing valuable points.

But in the end, the day’s stage was won by the powerful Misha Boassan-Hagen, who stayed out of trouble …

… and came barreling over the pockmarked tarmac of 19th Avenue to bring home the stage victory.

1. Footage of the three Tour de France mishaps today — made even better by lively commentary in some language I do not understand:

(DISCLAIMER: It should go without saying that all of the photos we present here in our coverage of Le Tour de Milk Crate are actual candid photos of actual innocent bystanders spotted in Eugene. No dramatizations or setups have been used, heavens no.)

Catch up on all of this year’s nonsense.