You know those British towns that have names like Henley-on-Thames and Stratford-upon-Avon?

Well, from now on we shall refer to the corner of pavement outside Lucky Noodle as Sharrow-upon-Pearl.

Because there is a sharrow on Pearl Street! My god, I came to a screeching halt when I saw it. For those of you who don’t know what a sharrow is, here it is: 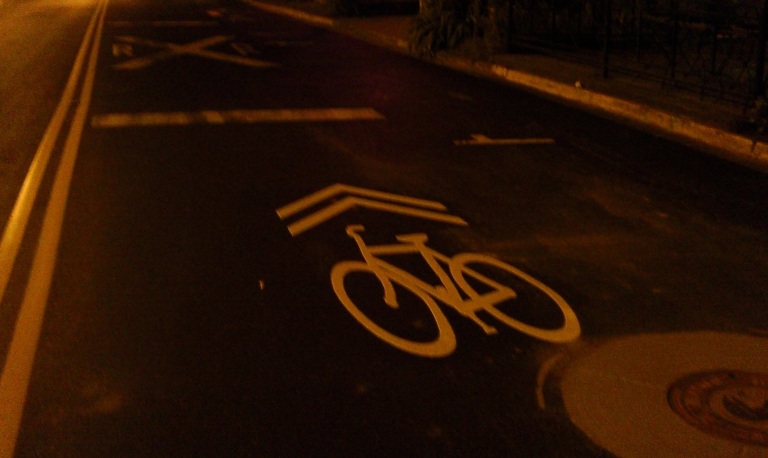 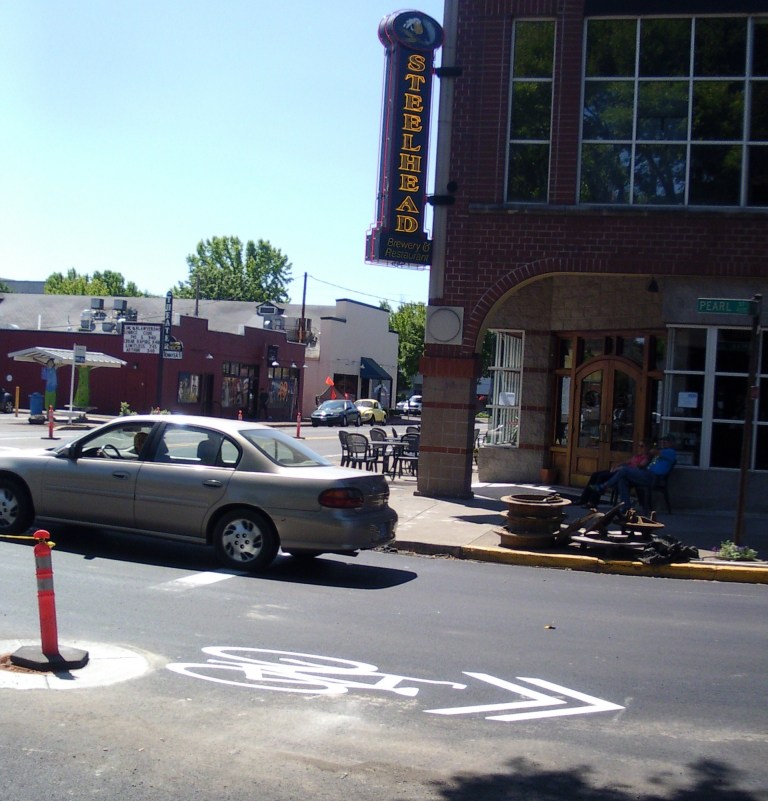 Yes, this marking on the smooth, new asphalt of the just repaved stretch of Pearl Street is called a sharrow. There are two of them, actually — one at the north end of the block and one at the south end.

But we wonder — as you should — if anyone aside from serious urban cyclists will actually know what this pavement marking means.

It occurs to us that we might mention that Portland has whole herds of sharrows marching in the streets, but, alas, we tire sometimes of Portland-upon-Hipness. So we will speak no more of it.

Anyway, I had asked some people at the city public works department and at the Eugene Police Department for a nutshell explanation of what a sharrow means. There was none forthcoming, but I got a few responses that people who might know were out of town — that sort of thing.

But Lee Shoemaker, the city of Eugene’s bicycle/pedestrian coordinator (someday we will write a post about nothing but his title), says the city is working on a video and flier explaining what a sharrow is and how to use it. He says the city is also planning a media campaign about sharrows.

In the meantime, you could go back and read the Original Post About Sharrows, which I have to say is a favorite of mine. And one of the things you would learn is that a sharrow is — at least as near as I can determine — sign that it’s time for cars and bikes to play nice and share the road. You would also learn that this is not the first sharrow in Eugene. There are a few experimental sharrows on 33rd Avenue way down in the bowels of south Eugene. But nobody ever goes down there.

This one, being in the heart of Fifth Street Market, we expect will cause much more confusion and possibly consternation. Sharrows are, you might say, a “new idea” in Eugene. And we know how new ideas go over with some people.

But there are more sharrows to come, it appears — on the stretch of 13th Avenue just west of campus, for instance.

Speaking of sharrows, you may know — if you’ve been reading here long — that I coincidentally happen to be married to someone named Sharrow. At least as far as you know.

And today we are proud to introduce a new feature here at Eugene Bicyclist. We call it:

I’ve posted from time to time about all those cell phones I have found on the street. Here’s another one: Cellphone-upon-Friendly:

And guess whose phone that is?

Yes, Sharrow and I were riding along Friendly Street one evening and she suddenly mentioned that she had heard something perhaps fall out of her purse — which was hanging precariously out of the Xtracycle’s pannier. She heard it some ways back, though how far back she wasn’t sure.

“I thought it was leaves,” she said. But now she couldn’t find her phone in her purse. So we backtracked for a number of blocks while I repeatedly called her phone with my phone. Then I heard the tinny Verizon ringtone known as “Queen of the Night” emanating from the pavement.

And there it was.

This was followed a few days later by a second Mishap With Sharrow. For reasons we won’t go into, Sharrow ended up riding my fixie one day, having slung her purse over her shoulder.

And then she discovered this new fixed-gear braking technique:

We call it: Purse-upon-Spokes. Which really was totally unnecessary as my fixie does have a brake. But it’s good to be safe, I guess.

As you have probably noticed already there is a common denominator here. Purses. Carelessly wielded. Danger.

So, keep your purses in your milk crates, please.