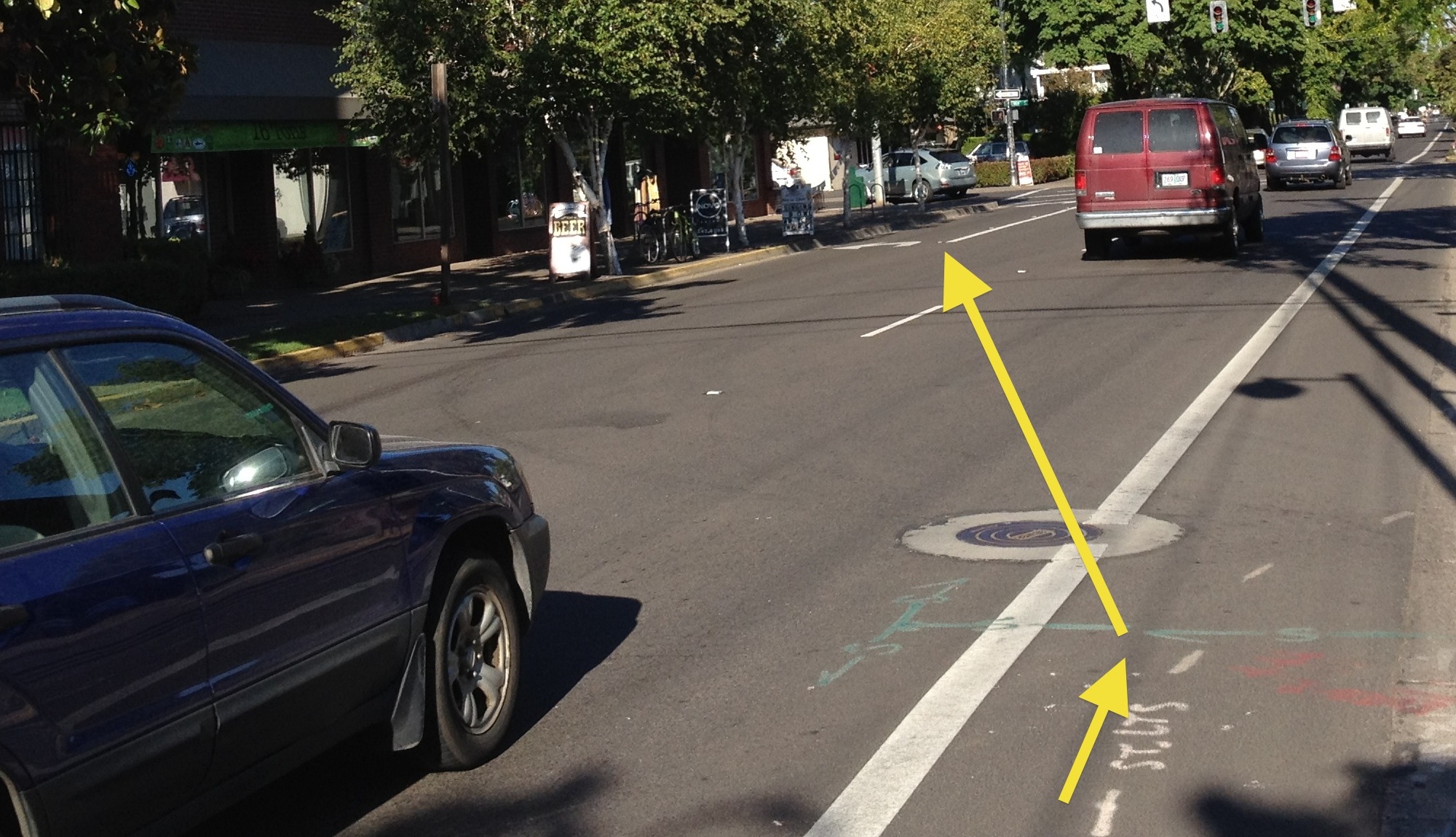 Believe it or not, I don’t get yelled at much. But I did this week. Twice actually if you count “skinner city cyclist’s” comment on the last post.

(I love “skinner.” Usually I completely disagree with most of what he says, but he has a certain charm. And every now and then he keeps me honest. But we’ll get to that in a minute.)

First, my commute to work. I was heading down 13th in the bike lane. I stopped at a red light at Pearl. I will point out that I actually stopped and waited for the light to turn green. So there.

(Yesterday, I watched a guy approach a red light on a bike. Two cyclists were stopped in front of him in the bike lane, waiting for the light. As he neared them, he said, “Oh, come on!” sort of weaved between them and accelerated right through the red light. But I digress.)

The light turned and I continued down 13th. I wanted to turn left on High, which meant merging left across two lanes of traffic to get to the left turn lane. There was a line of traffic in the right lane. But at one point a small gap appeared, I made a signal with my left arm, and veered left into the right lane in front of a black pickup. The left lane was clear, so I just kept going left.

The guy behind me in the pickup laid on the horn. Since I was now in the left lane, he came by on my right. He rolled down the window, and screamed in what I judged to be an unfriendly manner: “You think you can pull in front of people just because you’re on a bike?! You have to obey the rules!” Or something to that effect.

This is way out of line. I would have cut the guy off if I had been driving a car, too.

But he didn’t have to slam on his brakes or anything. I never felt I put myself in danger of being hit, although I may have mildly impeded him from racing right up to the rear bumper of the car in front of him and then slamming on his brakes.

But this is a problem we face, people. The image that cyclists are arrogant jerks.

Look, I’m willing to say my lane change was maybe “assertive.” But to suggest it had anything to do with my being on a bike is just wrong. If he wanted to call me an arrogant jerk, that’s OK. But it’s not because I’m on a bike.

But this raises a question: If you believe in the urban cycling “movement,” do you bear more responsibility to ride courteously, to conduct yourself in impeccably virutuous ways at all times? You know, in a fruitless effort to improve the image of cyclists in general? I don’t know. Maybe so.

Now to “skinner’s” comment on the post in which I called for EPD Appreciation Day. I forget sometimes, that people take this blog seriously.

But the point he makes that I was condoning or encouraging irresponsible cycling — you know, admiring the guy riding backwards up Willamette Street — is probably a legitimate thing to point out.

One day I scold people for running red lights. Another day I cheer on riding backwards. I could apologize — like Rep. Todd Akin — suggesting I accidentally “used the wrong words in the wrong way.”

But I’m going to escape from this bit of hypocrisy instead just by quoting Walt Whitman: